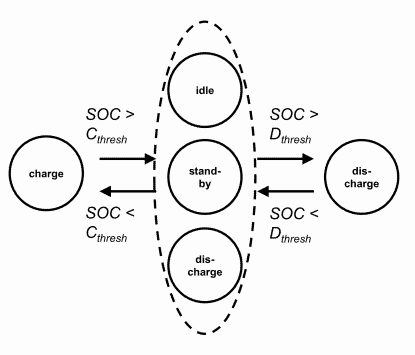 Abstract: The present disclosure provides a distributed and anonymous approach to demand response of an electricity system. The approach conceptualizes energy consumption and production of distributed-energy resources (DERs) via discrete energy packets that are coordinated by a cyber computing entity that grants or denies energy packet requests from the DERs. The approach leverages a condition of a DER, which is particularly useful for (1) thermostatically-controlled loads, (2) non-thermostatic conditionally-controlled loads, and (3) bi-directional distributed energy storage systems. In a first aspect of the present approach, each DER independently requests the authority to switch on for a fixed amount of time (i.e., packet duration). The coordinator determines whether to grant or deny each request based electric grid and/or energy or power market conditions. In a second aspect, bi-directional DERs, such as distributed-energy storage systems (DESSs) are further able to request to supply energy to the grid.