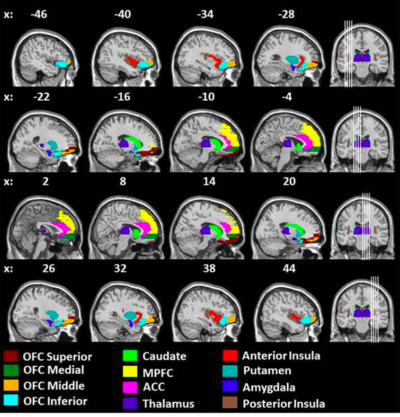 Abstract: Abnormalities across different domains of neuropsychological functioning may constitute a risk factor for heavy drinking during adolescence and for developing alcohol use disorders later in life. However, the exact nature of such multi‐domain risk profiles is unclear, and it is further unclear whether these risk profiles differ between genders. We combined longitudinal and cross‐sectional analyses on the large IMAGEN sample (N ≈ 1000) to predict heavy drinking at age 19 from gray matter volume as well as from psychosocial data at age 14 and 19—for males and females separately. Heavy drinking was associated with reduced gray matter volume in 19‐year‐olds' bilateral ACC, MPFC, thalamus, middle, medial and superior OFC as well as left amygdala and anterior insula and right inferior OFC. Notably, this lower gray matter volume associated with heavy drinking was stronger in females than in males. In both genders, we observed that impulsivity and facets of novelty seeking at the age of 14 and 19, as well as hopelessness at the age of 14, are risk factors for heavy drinking at the age of 19. Stressful life events with internal (but not external) locus of control were associated with heavy drinking only at age 19. Personality and stress assessment in adolescents may help to better target counseling and prevention programs. This might reduce heavy drinking in adolescents and hence reduce the risk of early brain atrophy, especially in females. In turn, this could additionally reduce the risk of developing alcohol use disorders later in adulthood.