Methylation in OTX2 and Related Genes, Maltreatment, and Depression in Children 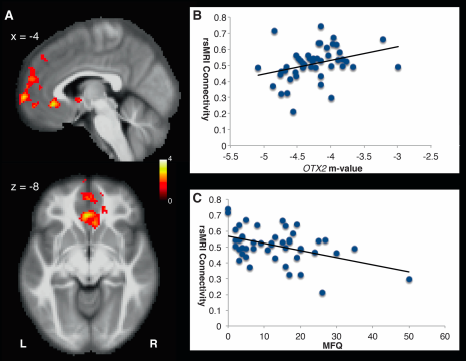 Abstract: Through unbiased transcriptomics and multiple molecular tools, transient downregulation of the Orthodenticle homeobox 2 (OTX2) gene was recently causatively associated with the development of depressive-like behaviors in a mouse model of early life stress. The analyses presented in this manuscript test the translational applicability of these findings by examining peripheral markers of methylation of OTX2 and OTX2-regulated genes in relation to measures of depression and resting-state functional connectivity data collected as part of a larger study examining risk and resilience in maltreated children. The sample included 157 children between the ages of 8 and 15 years (χ = 11.4, SD = 1.9). DNA specimens were derived from saliva samples and processed using the Illumina 450 K beadchip. A subset of children (N = 47) with DNA specimens also had resting-state functional MRI data. After controlling for demographic factors, cell heterogeneity, and three principal components, maltreatment history and methylation in OTX2 significantly predicted depression in the children. In terms of the imaging data, increased OTX2 methylation was found to be associated with increased functional connectivity between the right vmPFC and bilateral regions of the medial frontal cortex and the cingulate, including the subcallosal gyrus, frontal pole, and paracingulate gyrus—key structures implicated in depression. Mouse models of early stress hold significant promise in helping to unravel the mechanisms by which child adversity confers risk for psychopathology, with data presented in this manuscript supporting a potential role for OTX2 and OTX2-related (e.g., WNT1, PAX6) genes in the pathophysiology of stress-related depressive disorders in children.