More recent
The effects of morphology and fitness on catastrophic interference

Less recent
The quoter model: a paradigmatic model of the social flow of written information 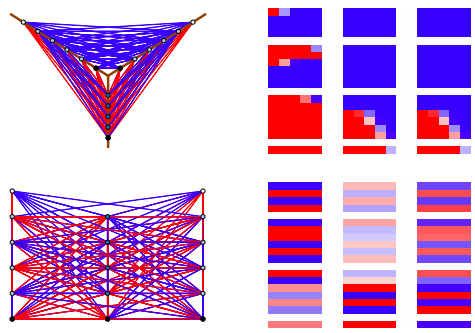 Abstract: A long time goal of evolutionary roboticists is to create everincreasing lifelike robots which reflect the important aspects of biology in their behavior and form. One way to create such creatures is to use evolutionary algorithms and genotype to phenotype maps which act as proxies for biological development. One such algorithm is HyperNEAT whose use of a substrate which can be viewed as an abstraction of spatial development used by Hox genes. Previous work has looked into answering what effect changing the embedding has on HyperNEAT’s efficiency, however no work has been done on the effect of representing different aspects of the agents morphology within the embeddings. We introduce the term embodied embeddings to capture the idea of using information from the morphology to dictate the locations of neurons in the substrate. We further compare three embodied embeddings, one which uses the physical structure of the robot and two which use abstract information about the robot’s morphology, on an embodied version of the retina task which can be made modular, hierarchical, or a combination of both.