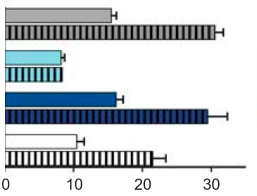 Abstract: Ubiquitously expressed genes have been implicated in a variety of specific behaviors, including responses to ethanol. However, the mechanisms that confer this behavioral specificity have remained elusive. Previously, we showed that the ubiquitously expressed small GTPase Arf6 is required for normal ethanol-induced sedation in adult Drosophila. Here, we show that this behavioral response also requires Efa6, one of (at least) three Drosophila Arf6 guanine exchange factors. Ethanol-naive Arf6 and Efa6 mutants were sensitive to ethanol-induced sedation and lacked rapid tolerance upon re-exposure to ethanol, when compared with wild-type flies. In contrast to wild-type flies, both Arf6 and Efa6 mutants preferred alcohol-containing food without prior ethanol experience. An analysis of the human ortholog of Arf6 and orthologs of Efa6 (PSD1-4) revealed that the minor G allele of single nucleotide polymorphism (SNP) rs13265422 in PSD3, as well as a haplotype containing rs13265422, was associated with an increased frequency of drinking and binge drinking episodes in adolescents. The same haplotype was also associated with increased alcohol dependence in an independent European cohort. Unlike the ubiquitously expressed human Arf6 GTPase, PSD3 localization is restricted to the brain, particularly the prefrontal cortex (PFC). Functional magnetic resonance imaging revealed that the same PSD3 haplotype was also associated with a differential functional magnetic resonance imaging signal in the PFC during a Go/No-Go task, which engages PFC-mediated executive control. Our translational analysis, therefore, suggests that PSD3 confers regional specificity to ubiquitous Arf6 in the PFC to modulate human alcohol-drinking behaviors.