Less recent
Is language evolution grinding to a halt? The scaling of lexical turbulence in English fiction suggests it is not 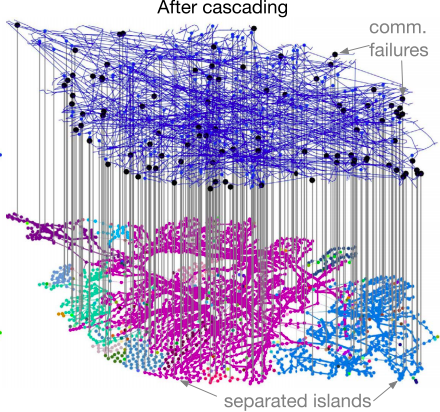 Abstract: Increased interconnection between critical infrastructure networks, such as electric power and communications systems, has important implications for infrastructure reliability and security. Others have shown that increased coupling between networks that are vulnerable to internetwork cascading failures can increase vulnerability. However, the mechanisms of cascading in these models differ from those in real systems and such models disregard new functions enabled by coupling, such as intelligent control during a cascade. This paper compares the robustness of simple topological network models to models that more accurately reflect the dynamics of cascading in a particular case of coupled infrastructures. First, we compare a topological contagion model to a power grid model. Second, we compare a percolation model of internetwork cascading to three models of interdependent power-communication systems. In both comparisons, the more detailed models suggest substantially different conclusions, relative to the simpler topological models. In all but the most extreme case, our model of a “smart” power network coupled to a communication system suggests that increased power-communication coupling decreases vulnerability, in contrast to the percolation model. Together, these results suggest that robustness can be enhanced by interconnecting networks with complementary capabilities if modes of internetwork failure propagation are constrained.