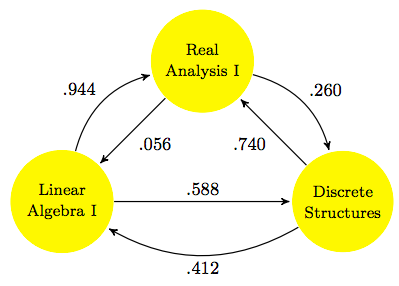 Abstract: This work extends the rank aggregation framework for the setting of discovering optimal course sequences at the university level, and contributes to the literature on educational applications of network analysis. Each student provides a partial ranking of the courses taken throughout her or his undergraduate career. We build a network of courses by computing pairwise rank comparisons between courses based on the order students typically take them, and aggregate the results over the entire student population, to obtain a proxy for the rank offset between pairs of courses. We extract a global ranking of the courses via several state-of-the art algorithms for ranking with pairwise noisy information, including SerialRank, Rank Centrality, and the recent SyncRank based on the group synchronization problem. We test this application of rank aggregation on 15 years of student data from the Department of Mathematics at the University of California, Los Angeles (UCLA). Furthermore, we experiment with the above approach on different subsets of the student population conditioned on final GPA, and highlight several differences in the obtained rankings that uncover potential hidden pre-requisites in the Mathematics curriculum.