How morphological development can guide evolution 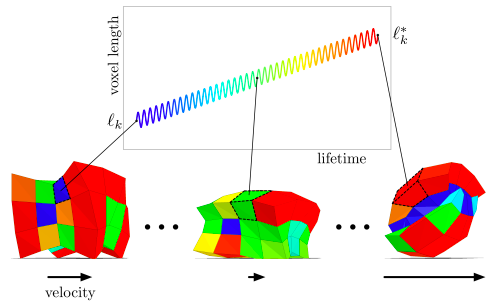 Abstract: Organisms result from adaptive processes interacting across different time scales. One such interaction is that between development and evolution. Models have shown that development sweeps over several traits in a single agent, sometimes exposing promising static traits. Subsequent evolution can then canalize these rare traits. Thus, development can, under the right conditions, increase evolvability. Here, we report on a previously unknown phenomenon when embodied agents are allowed to develop and evolve: Evolution discovers body plans robust to control changes, these body plans become genetically assimilated, yet controllers for these agents are not assimilated. This allows evolution to continue climbing fitness gradients by tinkering with the developmental programs for controllers within these permissive body plans. This exposes a previously unknown detail about the Baldwin effect: instead of all useful traits becoming genetically assimilated, only traits that render the agent robust to changes in other traits become assimilated. We refer to this as differential canalization. This finding also has implications for the evolutionary design of artificial and embodied agents such as robots: robots robust to internal changes in their controllers may also be robust to external changes in their environment, such as transferal from simulation to reality or deployment in novel environments.