More recent
When are decentralized infrastructure networks preferable to centralized ones? 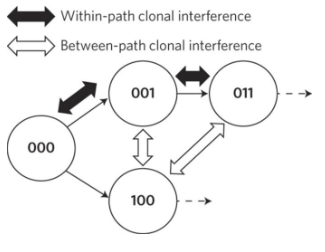 Abstract: The increasing availability of genotype–phenotype maps for different combinations of mutations has empowered evolutionary biologists with the tools to interrogate the predictability of adaptive evolution, especially in the context of the evolution of antimicrobial resistance. Large microbial populations are known to generate competing beneficial mutations, but determining how these mutations contribute to the adaptive trajectories that are most likely to be followed remains a challenge. Despite a recognition that there may also be competition between successive alleles on the same trajectory, prior studies have not fully considered how this impacts adaptation rates along, or likelihood of following, individual trajectories. Here, we develop a metric that quantifies the competition between successive alleles along adaptive trajectories and show how this competition largely governs the rate of evolution in simulations on empirical fitness landscapes for proteins involved in drug resistance in two species of malaria (Plasmodium falciparum and P. vivax). Our findings reveal that a trajectory with a larger-than-average initial fitness increase may have smaller fitness increases in later steps, which slows adaptation. In some circumstances, these trajectories may be outcompeted by alleles on faster alternative trajectories that are being explored simultaneously. The ability to predict adaptation rates along accessible trajectories has implications for efforts to manage antimicrobial resistance in real-world settings and for the broader intellectual pursuit of predictive evolution in complex adaptive fitness landscapes for a variety of application domains.