Brain substrates of reward processing and the μ-opioid receptor: a pathway into pain? 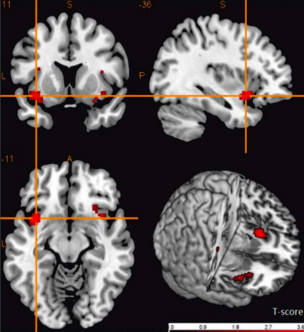 Abstract: The processing of reward and reinforcement learning seems to be important determinants of pain chronicity. However, reward processing is already altered early in life and if this is related to the development of pain symptoms later on is not known. The aim of this study was first to examine whether behavioural and brain-related indicators of reward processing at the age of 14 to 15 years are significant predictors of pain complaints 2 years later, at 16 to 17 years. Second, we investigated the contribution of genetic variations in the opioidergic system, which is linked to the processing of both, reward and pain, to this prediction. We used the monetary incentive delay task to assess reward processing, the Children's Somatization Inventory as measure of pain complaints and tested the effects of 2 single nucleotide polymorphisms (rs1799971/rs563649) of the human µ-opioid receptor gene. We found a significant prediction of pain complaints by responses in the dorsal striatum during reward feedback, independent of genetic predisposition. The relationship of pain complaints and activation in the periaqueductal gray and ventral striatum depended on the T-allele of rs563649. Carriers of this allele also showed more pain complaints than CC-allele carriers. Therefore, brain responses to reward outcomes and higher sensitivity to pain might be related already early in life and may thus set the course for pain complaints later in life, partly depending on a specific opioidergic genetic predisposition.