Zipf's law is a consequence of coherent language production 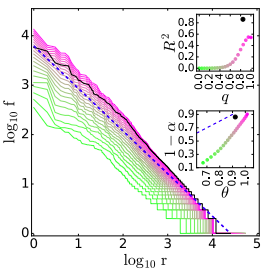 Abstract: The task of text segmentation may be undertaken at many levels in text analysis---paragraphs, sentences, words, or even letters. Here, we focus on a relatively fine scale of segmentation, hypothesizing it to be in accord with a stochastic model of language generation, as the smallest scale where independent units of meaning are produced. Our goals in this letter include the development of methods for the segmentation of these minimal independent units, which produce feature-representations of texts that align with the independence assumption of the bag-of-terms model, commonly used for prediction and classification in computational text analysis. We also propose the measurement of texts' association (with respect to realized segmentations) to the model of language generation. We find (1) that our segmentations of phrases exhibit much better associations to the generation model than words and (2), that texts which are well fit are generally topically homogeneous. Because our generative model produces Zipf's law, our study further suggests that Zipf's law may be a consequence of homogeneity in language production.