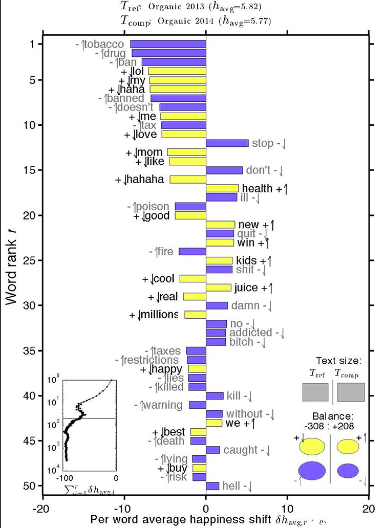 Abstract: Twitter has become the “wild-west” of marketing and promotional strategies for advertisement agencies. Electronic cigarettes have been heavily marketed across Twitter feeds, offering discounts, “kid-friendly” flavors, algorithmically generated false testimonials, and free samples.
All electronic cigarette keyword related tweets from a 10% sample of Twitter spanning January 2012 through December 2014 (approximately 850,000 total tweets) were identified and categorized as Automated or Organic by combining a keyword classification and a machine trained Human Detection algorithm. A sentiment analysis using Hedonometrics was performed on Organic tweets to quantify the change in consumer sentiments over time. Commercialized tweets were topically categorized with key phrasal pattern matching.
The overwhelming majority (80%) of tweets were classified as automated or promotional in nature. The majority of these tweets were coded as commercialized (83.65% in 2013), up to 33% of which offered discounts or free samples and appeared on over a billion twitter feeds as impressions. The positivity of Organic (human) classified tweets has decreased over time (5.84 in 2013 to 5.77 in 2014) due to a relative increase in the negative words ‘ban’, ‘tobacco’, ‘doesn’t’, ‘drug’, ‘against’, ‘poison’, ‘tax’ and a relative decrease in the positive words like ‘haha’, ‘good’, ‘cool’. Automated tweets are more positive than organic (6.17 versus 5.84) due to a relative increase in the marketing words like ‘best’, ‘win’, ‘buy’, ‘sale’, ‘health’, ‘discount’ and a relative decrease in negative words like ‘bad’, ‘hate’, ‘stupid’, ‘don’t’.
Due to the youth presence on Twitter and the clinical uncertainty of the long term health complications of electronic cigarette consumption, the protection of public health warrants scrutiny and potential regulation of social media marketing.