Social contribution in the design of adaptive machines on the web

Proceedings of the 15th International Conference on the Synthesis and Simulation of Living Systems (ALife 2016), , , 2016 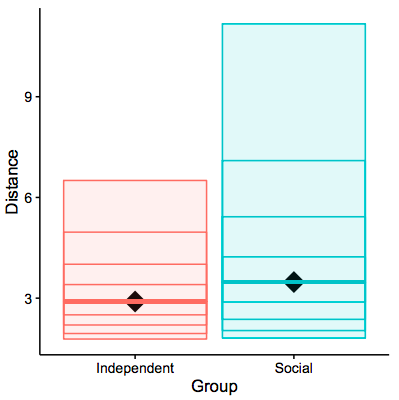 Abstract: The Web has created new opportunities for interactive problem solving and design by large groups. In the context of robotics, we have shown recently that a crowd of non-experts are capable of designing adaptive machines over the Web. However, determining the degree to which collective contribution plays a part in these tasks requires further investigation. We hypothesize that there exist subtle yet measurable social dynamics that occur during the collaborative design of robots on the Web. To test this, we enabled a crowd to rapidly design and train simulated, web-embedded robots1 . We compared the robots designed by a socially-interacting group of individuals to another group whose members were isolated from one another. We found that there exists a latent quality in the robots designed by the social group that was significantly less prevalent in the robots designed by individuals working alone. Thus, there must exist synergies in the former group that facilitate this design task. We also show that this latent quantity correlates with the desired design outcome, which was fast forward locomotion. However, the quantity – when distilled into its component parts – is not more prevalent in one group than another. This finding demonstrates that there are indeed traces left behind in the machines designed by the crowd that betray the social dynamics that gave rise to them. Demonstrating the existence of such quantities and the methodology for extracting them presents opportunities for crafting interfaces to magnify these synergies and thus improve collective design of robots over the web in particular, and crowd design activities in general.