Movers and stayers: how residential selection contributes to the association between female body mass index and neighborhood characteristics 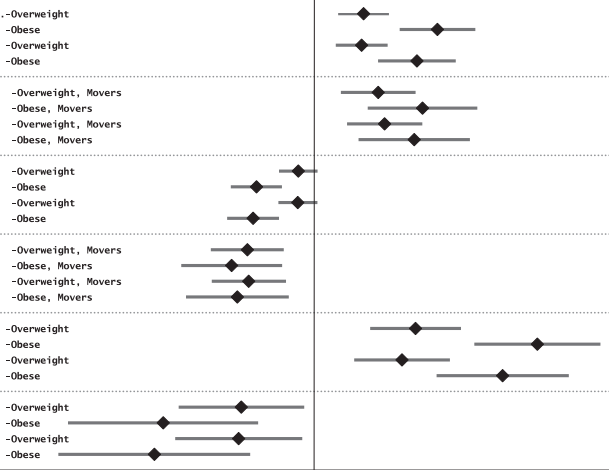 Abstract: Background/Objectives: To examine how a woman’s current body mass index (BMI) is associated with nonrandom residential migration that is based on the average BMI of her origin and destination neighborhoods.
Subjects/Methods: Among women having at least two children, all birth certificates from Salt Lake county from 1989 to 2010 (n=34 010) were used to obtain prepregnancy weights before the first and second births, residential location and sociodemographic information. Census data were used for measures of walkability of neighborhoods.
Results: After adjustments for age, education, race/ethnicity and marital status, obese women living in the leanest neighborhoods are found to be three times more likely (odds ratio (OR)=3.03, 95% confidence interval (CI) 2.06–4.47) to move to the heaviest neighborhoods relative to women with healthy weight (BMI between 18 and 25 kg m−2). Conversely, obese women in the heaviest neighborhoods are 60% less likely (OR=0.39, 95% CI 0.22–0.69) to move to the leanest neighborhoods relative to healthy weight women. Indicators of relatively greater walkability (older housing, greater proportion of residents who walk to work) and higher median family income characterize leaner neighborhoods.
Conclusions: The findings are consistent with the hypothesis that nonrandom selection into and out of neighborhoods accounts for some of the association between BMI and neighborhood characteristics.