A preferential attachment approach to community structure Growing networks of overlapping communities with internal structureand the structure of communities. 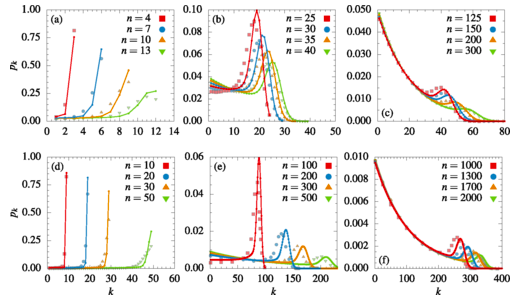 Abstract: We introduce an intuitive model that describes both the emergence of community structure and the evolution of the internal structure of communities in growing social networks. The model comprises two complementary mechanisms: One mechanism accounts for the evolution of the internal link structure of a single community, and the second mechanism coordinates the growth of multiple overlapping communities. The first mechanism is based on the assumption that each node establishes links with its neighbors and introduces new nodes to the community at different rates. We demonstrate that this simple mechanism gives rise to an effective maximal degree within communities. This observation is related to the anthropological theory known as Dunbar's number, i.e., the empirical observation of a maximal number of ties which an average individual can sustain within its social groups. The second mechanism is based on a recently proposed generalization of preferential attachment to community structure, appropriately called structural preferential attachment (SPA). The combination of these two mechanisms into a single model (SPA+) allows us to reproduce a number of the global statistics of real networks: The distribution of community sizes, of node memberships, and of degrees. The SPA+ model also predicts (a) three qualitative regimes for the degree distribution within overlapping communities and (b) strong correlations between the number of communities to which a node belongs and its number of connections within each community. We present empirical evidence that support our findings in real complex networks.