Proceedings of the Companion Publication of the 2015 Annual Conference on Genetic and Evolutionary Computation, , 1173-1176, 2015 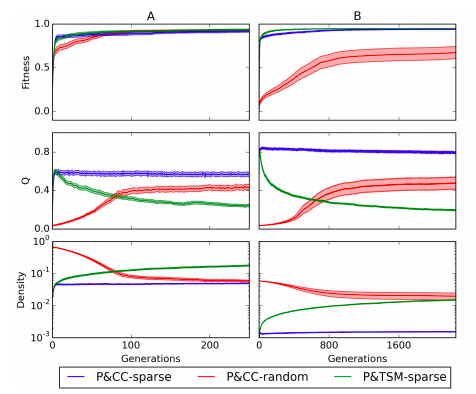 Abstract: A network is structurally modular if it can be divided into tightly connected groups which are weakly connected or disconnected from each other. Such networks are known to be capable of fast evolutionary adaptation, which makes modularity a highly desired property of networks involved in evolutionary computation. Modularity is known to correlate positively with another network parameter, sparsity. Based on this relationship, we hypothesize that starting evolution with a population of sparse networks should increase the modularity of the evolved networks. We find that this technique can enhance the performance of an existing technique for modularity evolution, multiobjective performance-connection cost (P&CC) optimization, and enable a multiobjective algorithm which maximizes performance and minimizes time since last mutation to produce modular solutions almost as efficiently as the P&CC optimization does.