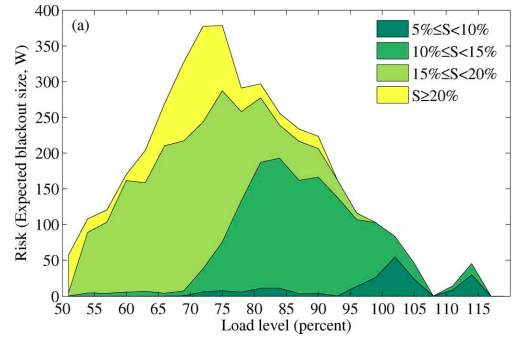 Abstract: The potential for cascading failure in power systems adds substantially to overall reliability risk. Monte Carlo sampling can be used with a power system model to estimate this impact, but doing so is computationally expensive. This paper presents a new approach to estimating the risk of large cascading blackouts triggered by multiple contingencies. The method uses a search algorithm (Random Chemistry) to identify blackout-causing contingencies, and then combines the results with outage probabilities to estimate overall risk. Comparing this approach with Monte Carlo sampling for two test cases (the IEEE RTS-96 and a 2383-bus model of the Polish system) illustrates that the new approach is at least two orders of magnitude faster than Monte Carlo, without introducing measurable bias. Moreover, the approach enables one to compute the sensitivity of overall blackout risk to individual component-failure probabilities in the initiating contingency, allowing one to quickly identify low-cost strategies for reducing risk. By computing the sensitivity of risk to individual initial outage probabilities for the Polish system, we found that reducing three line-outage probabilities by 50% would reduce cascading failure risk by 33%. Finally, we used the method to estimate changes in risk as a function of load. Surprisingly, this calculation illustrates that risk can sometimes decrease as load increases.