Direct numerical simulation of mixed convection in turbulent channel flow: on the Reynolds number dependency of momentum and heat transfer under unstable stratification

Proceedings of the 8th International Conference on Computational Heat and Mass Transfer, ICCHMT 2015, , , 2015 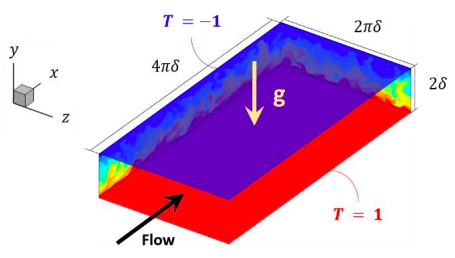 Abstract: Direct numerical simulations of unstably stratified turbulent channel flow have been performed in order to investigate the Reynolds number effect on mixed convection. Six different cases are considered with friction Reynolds number Re_\tau= 180 and 395 and friction Richardson number Ri_\tau= 0, 100 and 1000. It is shown that both friction coefficient and Nusselt number increase under unstable stratification for a sufficiently large Richardson number. At low Richardson number, the friction coefficient can either increase or decrease depending on the Reynolds number. The drag reduction is associated with an increase of mean velocity due to an enhanced dissipation of Reynolds shear stress by pressure strain in the buffer region. The breakdown of the Reynolds analogy is demonstrated as the turbulent Prandtl number exhibits a non-constant behavior due to buoyancy.