More recent
On the complexity of role colouring planar graphs, trees and cographs

Less recent
A shadowing problem in the detection of overlapping communities: Lifting the resolution limit through a cascading procedure 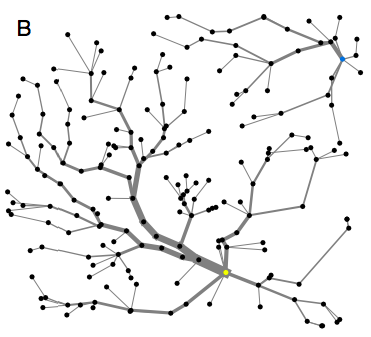 Abstract: While many large infrastructure networks, such as power, water, and natural gas systems, have similar physical properties governing flows, these systems tend to have distinctly different sizes and topological structures. This paper seeks to understand how these different size-scales and topological features can emerge from relatively simple design principles. Specifically, we seek to describe the conditions under which it is optimal to build decentralized network infrastructures, such as a microgrid, rather than centralized ones, such as a large high-voltage power system. While our method is simple it is useful in explaining why sometimes, but not always, it is economical to build large, interconnected networks and in other cases it is preferable to use smaller, distributed systems. The results indicate that there is not a single set of infrastructure cost conditions under which optimally-designed networks will have highly centralized architectures. Instead, as costs increase we find that average network sizes increase gradually according to a power-law. When we consider the reliability costs, however, we do observe a transition point at which optimally designed networks become more centralized with larger geographic scope. As the losses associated with node and edge failures become more costly, this transition becomes more sudden.