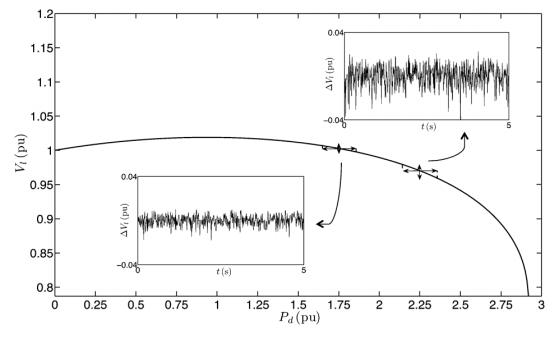 Abstract: Many dynamical systems, including power systems, recover from perturbations more slowly as they approach critical transitions - a phenomenon known as critical slowing down. If the system is stochastically forced, autocorrelation and variance in time-series data from the system often increase before the transition, potentially providing an early warning of coming danger. In some cases, these statistical patterns are sufficiently strong, and occur sufficiently far from the transition, that they can be used to predict the distance between the current operating state and the critical point. In other cases CSD comes too late to be a good indicator. In order to better understand the extent to which CSD can be used as an indicator of proximity to bifurcation in power systems, this paper derives autocorrelation functions for three small power system models, using the stochastic differential algebraic equations (SDAE) associated with each. The analytical results, along with numerical results from a larger system, show that, although CSD does occur in power systems, its signs sometimes appear only when the system is very close to transition. On the other hand, the variance in voltage magnitudes consistently shows up as a good early warning of voltage collapse.