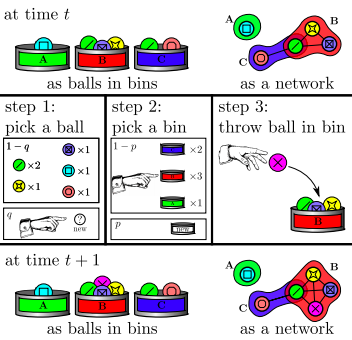 Abstract: Many complex systems have been shown to share universal properties of organization, such as scale independence, modularity, and self-similarity. We borrow tools from statistical physics in order to study structural preferential attachment (SPA), a recently proposed growth principle for the emergence of the aforementioned properties. We study the corresponding stochastic process in terms of its time evolution, its asymptotic behavior, and the scaling properties of its statistical steady state. Moreover, approximations are introduced to facilitate the modeling of real systems, mainly complex networks, using SPA. Finally, we investigate a particular behavior observed in the stochastic process, the peloton dynamics, and show how it predicts some features of real growing systems using prose samples as an example.