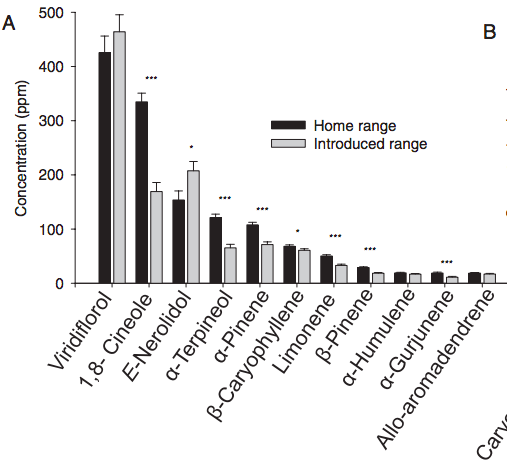 Abstract: We examined multivariate evolution of 20 leaf terpenoids in the invasive plant Melaleuca quinquenervia in a common garden experiment. Although most compounds, including 1,8‐Cineole and Viridiflorol, were reduced in home compared with invaded range genotypes, consistent with an evolutionary decrease in defense, one compound (E‐Nerolidol) was greater in invaded than home range genotypes. Nerolidol was negatively genetically correlated with Cineole and Viridiflorol, and the increase in this compound in the new range may have been driven by this negative correlation. There was positive selection on all three focal compounds, and a loss of genetic variation in introduced range genotypes. Selection skewers analysis predicted an increase in Cineole and Viridiflorol and a decrease or no change in Nerolidol, in direct contrast to the observed changes in the new range. This discrepancy could be due to differences in patterns of selection, genetic correlations, or the herbivore communities in the home versus introduced ranges. Although evolutionary changes in most compounds were consistent with the evolution of increased competitive ability hypothesis, changes in other compounds as well as selection patterns were not, indicating that it is important to understand selection and the nature of genetic correlations to predict evolutionary change in invasive species.