Flash Crash Phenomena and a Taxonomy of Extreme Behaviors 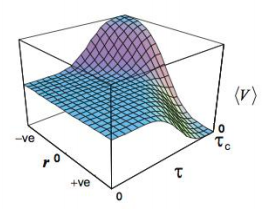 Abstract: Rare but potentially catastrophic real-world phenomena such as stock market crashes, are often referred to as rare or extreme ‘events’ on the assumption that they have a well-defined change (eg price-change) in some macroscopically measurable quantity (eg stock price) occurring at a particular point in space (eg Dow Jones) and time (eg at 10am), over a specific time-interval (eg 1 hour). If this idealization is indeed the case, then histograms can be obtained using historical data and, assuming the system is stationary, approximate point probabilities deduced to quantify the likelihood of future occurrence--albeit subject to the usual inaccuracies associated with performing sparse number statistics. However, as emphasized by Sornette, extreme'behaviors' such as the mysterious 2010 flash crash in stock prices shown in Fig. 1 in principle invoke an entirely different layer of difficulty, because (1) they do not have a well-defined duration, and hence may be missed when evaluating histograms of changes for a particular fixed, pre-defined time increment (eg 1 minute, 1 hour or 1 day); and (2) even if their duration and maximum size are well defined, they can take on an effectively infinite number of possible temporal profiles during that period, ie has its own characteristic time-dependence during. Hence for a given maximum drop size and duration, there are a priori myriad possible temporal forms of versus. This chapter takes a step toward examining whether these temporal profiles (ie vs. during) exhibit particular classes of behavior–and shows, for the case of a nontrivial toy model of a complex system, that there is indeed a taxonomy of such rare and extreme behaviors.