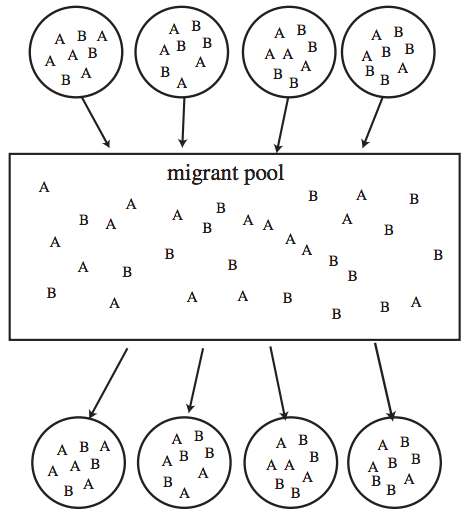 Abstract: A metacommunity can be defined as a set of communities that are linked by migration, and extinction and recolonization. In metacommunities, evolution can occur not only by processes that occur within communities such as drift and individual selection, but also by among-community processes, such as divergent selection owing to random differences among communities in species composition, and group and community-level selection. The effect of these among-community-level processes depends on the pattern of migration among communities. Migrating units may be individuals (migrant pool model), groups of individuals (single-species propagule pool model) or multi-species associations (multi-species propagule pool model). The most interesting case is the multi-species propagule pool model. Although this pattern of migration may a priori seem rare, it becomes more plausible in small well-defined ‘communities’ such as symbiotic associations between two or a few species. Theoretical models and experimental studies show that community selection is potentially an effective evolutionary force. Such evolution can occur either through genetic changes within species or through changes in the species composition of the communities. Although laboratory studies show that community selection can be important, little is known about how important it is in natural populations.