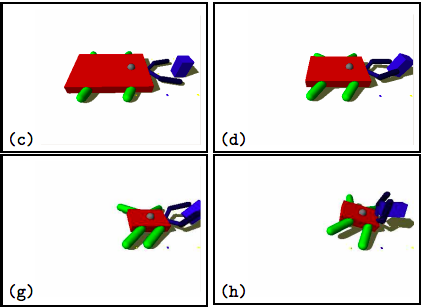 Abstract: Embodied cognition emphasizes that intelligent behavior results from the coupled dynamics between an agent's body, brain and environment. In response to this, several projects have jointly evolved robot morphology and control to realize desired behaviors. However, which aspects of a robot's morphology should be placed under evolutionary control remains an open question. Here it is shown that subjugating more of the robot's body plan to selection pressure may either slow or increase the rate of evolution, depending on the desired behavior. More specifically, it is shown that for the legged locomotion behavior evolved and described here, increasing the number of evolved morphological parameters slows adaptation. For a more complex behavior involving legged locomotion toward an object followed by manipulation of that object, increasing the number of evolved morphological parameters accelerates adaptation. This suggests that subjugating more of the robot's design to evolution may be of increasing utility for increasingly complex tasks.