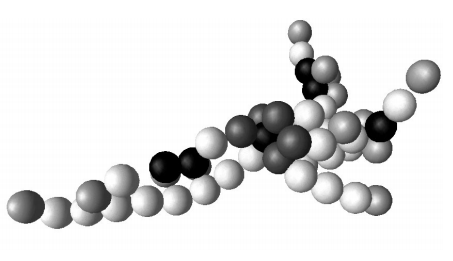 Abstract: In this report we introduce an artificial evolutionary system, Artificial Ontogeny (AO), that uses a developmental encoding scheme to translate a given genotype into a complete agent, which then acts in a physically-realistic virtual environment. Evolution is accomplished using a genetic algorithm, in which the genotypes are treated as genetic regulatory networks. The dynamics of the regulatory network direct the growth of the agent, and lead to the construction of both the morphology and neural control of the agent. We demonstrate that such a model can be used to evolve agents to perform non-trivial tasks, such as directed locomotion and block pushing in a noisy environment. It is shown that mutations expressed earlier in development tend to have a more variable morphological and behavioural effect than mutations expressed later in development, which tend to have a less pronounced effect. These results support the hypothesis that ontogeny provides artificial evolution with beneficial mutations that have varying degrees of phenotypic effect, depending on their onset of expression during development. In addition, we evolve agents using a fitness function which indirectly selects for increased size. In these agents we find evidence of functional specialization and repeated, differentiated structure. In the final section we argue that such a system would be a useful tool for the evolutionary design of morpo-functional machines.