A comparison of exact and approximate adjoint sensitivities in fluorescence tomography 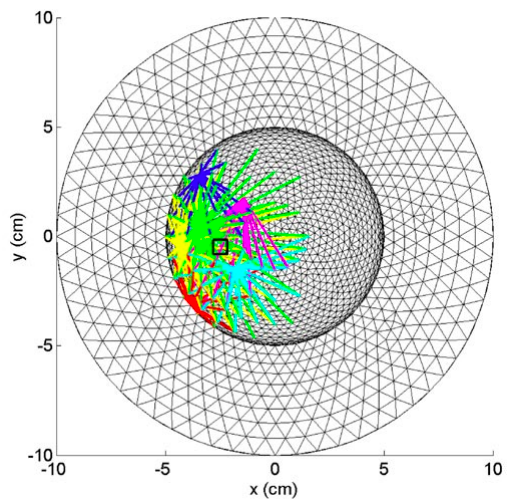 Abstract: Many approaches to fluorescence tomography utilize some form of regularized nonlinear least-squares algorithm for data inversion, thus requiring repeated computation of the Jacobian sensitivity matrix relating changes in observable quantities, such as emission fluence, to changes in underlying optical parameters, such as fluorescence absorption. An exact adjoint formulation of these sensitivities comprises three terms, reflecting the individual contributions of 1) sensitivities of diffusion and decay coefficients at the emission wavelength, 2) sensitivities of diffusion and decay coefficients at the excitation wavelength, and 3) sensitivity of the emission source term. Simplifying linearity assumptions are computationally attractive in that they cause the first and second terms to drop out of the formulation. The relative importance of the three terms is thus explored in order to determine the extent to which these approximations introduce error. Computational experiments show that, while the third term of the sensitivity matrix has the largest magnitude, the second term becomes increasingly significant as target fluorophore concentration or volume increases. Image reconstructions from experimental data confirm that neglecting the second term results in overestimation of sensitivities and consequently overestimation of the value and volume of the fluorescent target, whereas contributions of the first term are so low that they are probably not worth the additional computational costs.