The Road Less Travelled: Morphology in the Optimization of Biped Robot Locomotion 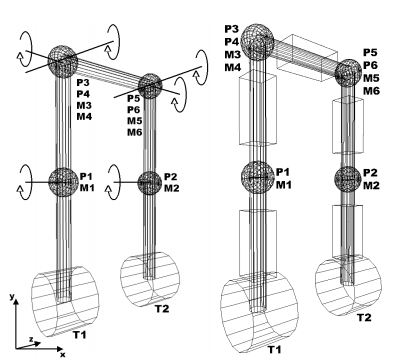 Abstract: In this paper, stable bipedal locomotion has been achieved using coupled evolution of morphology and control on a 5-link biped robot in a physics- based simulation environment. The robot was controlled by a closed loop recurrent neural network controller. The goal was to study the effect of macroscopic, midrange and microscopic changes in mass distribution along the biped skeleton to ascertain whether optimal morphology and control pairs could be discovered. The sensor-motor coupling determined that small changes in morphology manifest themselves as large changes in the performance of the biped, which were exploited by the optimization process. In this way, mechanical design and controller optimization were reduced to a single process, and more mutually optimized designs resulted. This work points to alternative routes for efficient automated and manual biped optimization.