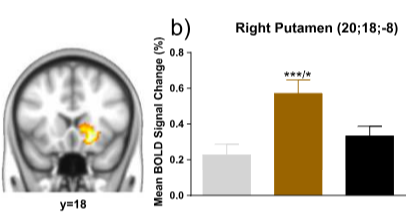 Abstract: Despite an increased understanding of nicotine addiction, there is a scarcity of research comparing the neural correlates of non‐drug reward between smokers and ex‐smokers. Long‐term changes in reward‐related brain functioning for non‐drug incentives may elucidate patterns of functioning that potentially contribute to ongoing smoking behaviour in current smokers. Similarly, examining the effects of previous chronic nicotine exposure during a period of extended abstinence may reveal whether there are neural correlates responsible for non‐drug reward processing that are different from current smokers. The current study, therefore, sets out to examine the neural correlates of reward and loss anticipation, and their respective outcomes, in smokers, ex‐smokers and matched controls using a monetary incentive delay task during functional magnetic resonance imaging. Here, we report that in the absence of any significant behavioural group differences, both smokers and ex‐smokers showed a significantly greater activation change in the lateral orbitofrontal/anterior insular cortex compared with smokers when anticipating both potential monetary gains and losses. We further report that ex‐smokers showed a significantly greater activation change in the ventral putamen compared with both controls and smokers and in the caudate compared with controls during the anticipation of potential monetary losses only. The results suggest that smoking may sensitize striato‐orbitofrontal circuitry subserving motivational processes for loss avoidance and reward gain in nicotine addiction.