The interplay of chaos between the terrestrial and giant planets 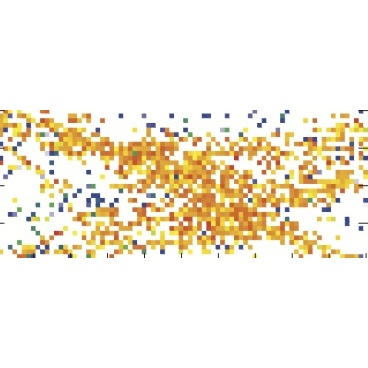 Abstract: We report on some simple experiments on the nature of chaos in our planetary system. We make the following interesting observations. First, we look at the system of Sun four Jovian planets as an isolated five-body system interacting only via Newtonian gravity. We find that if we measure the Lyapunov time of this system across thousands of initial conditions all within observational uncertainty, then the value of the Lyapunov time seems relatively smooth across some regions of initial condition space, while in other regions it fluctuates wildly on scales as small as we can reliably measure using numerical methods. This probably indicates a fractal structure of Lyapunov exponents measured across initial condition space. Then, we add the four inner terrestrial planets and several post-Newtonian corrections such as general relativity into the model. In this more realistic Sun eight-planet system, we find that the above structure of chaos for the outer planets becomes uniformly chaotic for almost all planets and almost all initial conditions, with a Lyapunov time-scale of about 5–20 Myr. This seems to indicate that the addition of the inner planets adds more chaos to the system. Finally, we show that if we instead remove the outer planets and look at the isolated five-body system of the Sun four terrestrial planets, then the terrestrial planets alone show no evidence of chaos at all, over a large range of initial conditions inside the observational error volume. We thus conclude that the uniformity of chaos in the outer planets comes not from the inner planets themselves, but from the interplay between the outer and inner ones. Interestingly, however, there exist rare and isolated initial conditions for which one individual outer planetary orbit may appear integrable over a 200-Myr time-scale, while all the other planets simultaneously appear chaotic.