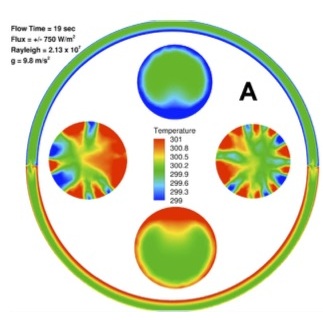 Abstract: This computational study investigates nonlinear dynamics of unstable convection in a 3D toroidal shaped thermal convection loop (i.e., thermosyphon) with heat flux boundary conditions; results are compared to prior 2D simulations. The lower half of the thermosyphon is subjected to a positive heat flux into the system while the upper half is cooled by an equal-but-opposite heat flux out of the system. Water is employed as the working fluid with fully temperature dependent thermophysical properties and the system of governing equations is solved using a finite volume method. Numerical simulations are performed for varying magnitudes of heat flux View the MathML source to yield Rayleigh numbers (i.e., buoyant forcing) ranging from 2.83×104⩽Ra⩽2.83×108 . Delineation of multiple convective flow regimes is achieved through evolution of the bulk-mass-flow time-series and the trajectory of the mass flow attractor. Simulation results demonstrate that multiple regimes are possible and include: (1) conduction, (2) damped, stable convection that asymptotes to steady-state, (3) unstable, Lorenz-like chaotic convection with flow reversals, and (4) high Rayleigh, aperiodic stable convection without flow reversals. For the Rayleigh numbers considered, it is observed that certain flow regimes are not accessible in toroidal simulations owing to the constraints of additional surface boundaries in a 3D system. The RMS of mass flow rate, power spectra of oscillatory behavior, dominant oscillatory frequency, and residence time are also described as a function of the buoyant forcing in the system.