If you’ve seen one worm, have you seen them all? Spatial, community, and genetic variability of tubificid communities in Montana 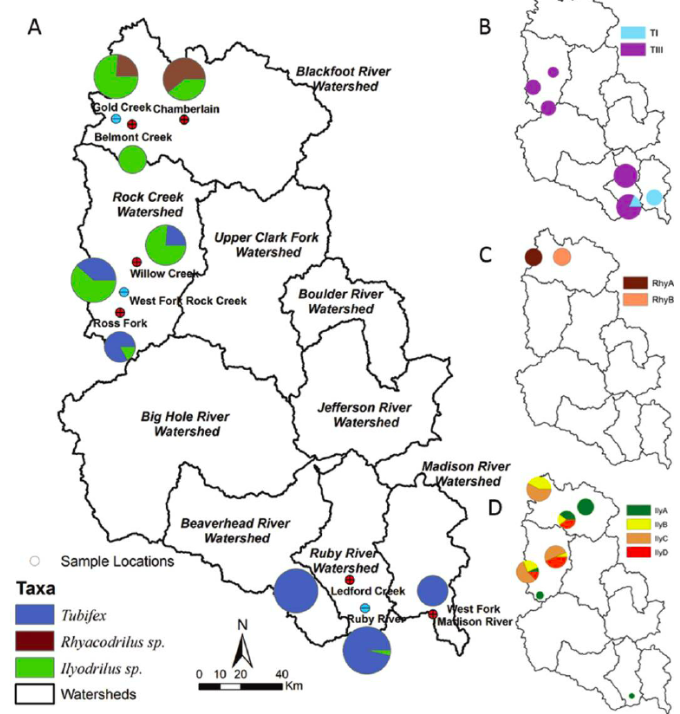 Abstract: Genetic studies are recognized increasingly as important for understanding naturally occurring disease dynamics and are used to predict host genetic diversity and coevolutionary processes and to identify species composition in ecological communities. Tubifex tubifex, the definitive host of the whirling disease parasite Myxobolus cerebralis, comprises 6 known lineages that vary widely in parasite susceptibility. We used 16S ribosomal DNA (16S rDNA) to identify relationships among genetic variability of 3 oligochaete genera (T. tubifex, Rhyacodrilus spp., and Ilyodrilus spp.; Oligochaeta:Tubificidae), oligochaete assemblage composition, and the presence of whirling disease in 9 locations across 4 watersheds in Montana, USA. We assessed genetic variability among 183 tubificid worms from locations classified as positive or negative for whirling disease based on 5 to 8 y of monitoring by the Montana Department of Fish, Wildlife, and Parks. Within genera, we found 2 groups of T. tubifex (lineages I and III), 2 groups of Rhyacodrilus spp., and 4 groups of Ilyodrilus spp., possibly suggesting cryptic species. The maximum genetic variability within taxa was relatively high (∼10% sequence divergence) for all 3 genera, but haplotype diversity within groups with >5% sequence divergence was greater for Ilyodrilus spp. (0.719) than for Tubifex spp. (0.246) and Rhyacodrilus spp. (0.143). The variation was nonrandomly distributed over the landscape. Oligochaete genetic composition was more similar among locations in the same watershed than among locations with or without whirling disease. Thus, oligochaete assemblage composition did not appear to be related to the presence of the disease at this watershed spatial scale. br>