Size and caste in temperature regulation by bumblebees 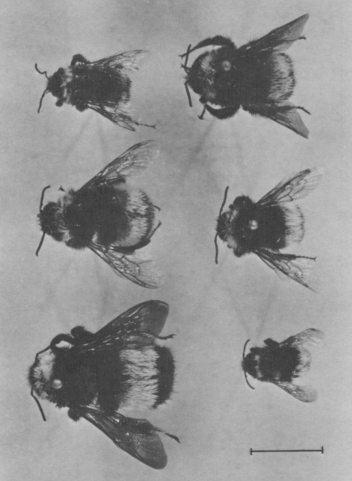 Abstract: Bumblebees ranging in mass from 65 mg (the smallest workers of the smallest species) to 830 mg (the largest queens of the largest species examined) maintained similar average thoracic temperatures (TsubTh) while foraging, even though the passive cooling rates of these bees over this size range varied fourfold. Although the bees regulated TsubTh between apparent lower and upper set points despite wide ranges of body size (and over wide ranges of ambient temperature), they allowed TsubTh to fluctuate between set points. The foraging activity of queens was relatively independent of ambient temperature (Tsuba), but workers (and particularly the smallest workers were often excluded at low Tsuba. Although the size-related rates of passive cooling of drones was similar to that of workers, they did not maintain the same TsubTh as workers on some kinds of flowers.