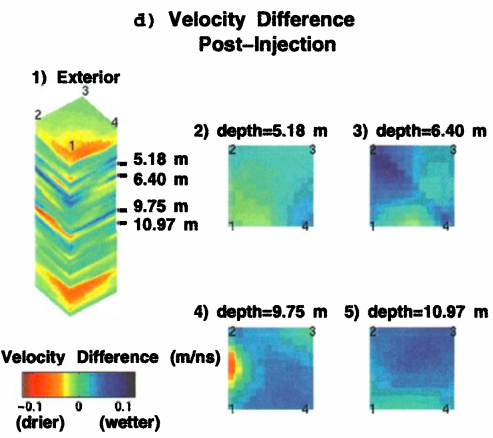 Abstract: We extend our methodology for three-dimensional parameter structure and value estimation and apply it to a Vermont test site. Ground-penetrating radar (GPR) cross-well travel times are inverted for estimation of heterogeneous GPR soil velocities before and after a controlled release of salt water in the unsaturated zone. The method, which is based on an approximation of the extended Kalman filter in conjunction with data-driven zonation, automatically estimates not only distributed zone values but also the number of zones, zone geometry, and zone covariance. Resultant GPR velocity estimates are shown to reduce travel time estimation errors and to be consistent with independent cone penetrometer measurements at all five walls at the site. Comparison of velocity estimates before and after forced injection of salt water is used to detect and visualize soil moisture patterns in three dimensions. By varying the 'cluster tolerance criterion' in the data-driven zonation process, the user can obtain a desired resolution of heterogeneity (number of zones used) in the resultant model.