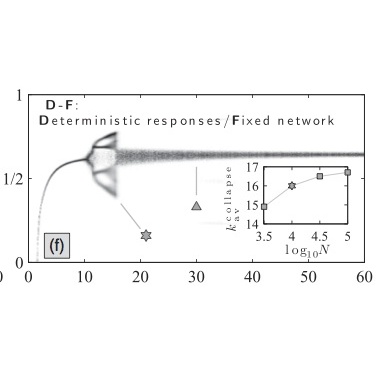 Abstract: We study a family of binary state, socially-inspired contagion models which incorporate imitation limited by an aversion to complete conformity. We uncover rich behavior in our models whether operating with probabilistic or deterministic individual response functions, both on dynamic or fixed random networks. In particular, we find significant variation in the limiting behavior of a population's infected fraction, ranging from steady-state to chaotic. We show that period doubling arises as we increase the average node degree, and that the universality class of this well known route to chaos depends on the interaction structure of random networks rather than the microscopic behavior of individual nodes. We find that increasing the fixedness of the system tends to stabilize the infected fraction, yet disjoint, multiple equilibria are possible depending solely on the choice of the initially infected node.