Proceedings of the 9th annual conference on Genetic and evolutionary computation, , 214-221, 2007 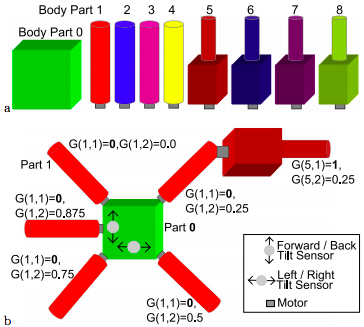 Abstract: In previous work a computational framework was demonstrated that allows a mobile robot to autonomously evolve models its own body for the purposes of adaptive behavior generation or recovery from damage. Conceivably, robots working in tandem could share their experiences such that one robot, when faced with a situation already encountered by another robot, could draw on that experience and adapt more rapidly. A first demonstration of this is given here: multiple robots with the same or similar body plan, but acting independently, combine self-models such that they accelerate modeling. Two approaches are investigated: the robots feed their experiences back into a common modeling engine, or they maintain their own modeling engine but share their best self-models with each other. It was found that the latter approach achieves a significant improvement in modeling compared to a single robot and compared to the former approach. This finding has implications for how to design autonomous robots acting in concert to achieve large-scale tasks.