Evolved Sensor Fusion and Dissociation in an Embodied Agent 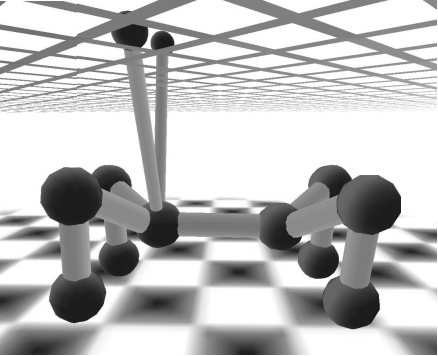 Abstract: W. Grey Walter first demonstrated that an autonomous robot could follow an environmental gradient to its source. In this paper, neural networks are evolved that allow a simulated, embodied quadrupedal agent to sense and follow an environmental gradient - in this case, local chemical concentration - to its source. Through a series of ablation experiments performed in silico, it is shown how artificial evolution gradually integrates and dissociates the different sensor modalities available to the agent in order to produce chemotacting behaviour. This work builds on that of Walter by indicating that evolutionary methods automatically generate chemotaxis by modulating simpler behaviours (here, forward locomotion) using a sensor modality (chemosensors) separate from those driving the simpler behaviour. This suggests that evolutionary methods are well suited for automatically generating behaviours more complex than chemotaxis by using it in turn as a base behaviour.