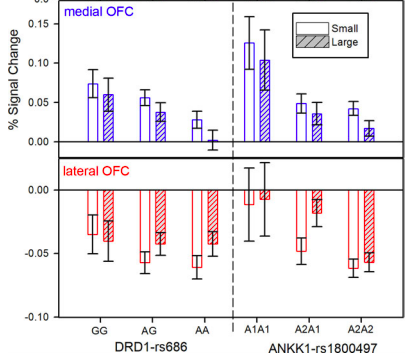 Abstract: Background: Abnormalities in reward circuit function are considered a core feature of addiction. Yet, it is still largely unknown whether these abnormalities stem from chronic drug use, a genetic predisposition, or both. Methods: In the present study, we investigated this issue using a large sample of adolescent children by applying structural equation modeling to examine the effects of several dopaminergic polymorphisms of the D1 and D2 receptor type on the reward function of the ventral striatum and orbital frontal cortex, and whether this relationship predicted the propensity to engage in early alcohol misuse behaviours at 14 years of age and again at 16 years of age. Results: The results demonstrated a regional specificity with which the functional polymorphism rs686 of the DRD1 gene and Taq1A of the ANKK1 gene influenced medial and lateral orbital frontal cortex activation during reward anticipation, respectively. Importantly, our path model revealed a significant indirect relationship between the rs686 of the DRD1 gene and early onset of alcohol misuse through a medial orbital frontal cortex and the ventral striatum interaction. Conclusions: These findings highlight the role of D1 and D2 in adjusting reward-related activations within the mesocorticolimbic circuitry, as well as in the susceptibility to early onset of alcohol misuse.