Scalable Co-Optimization of Morphology and Control in Embodied Machines 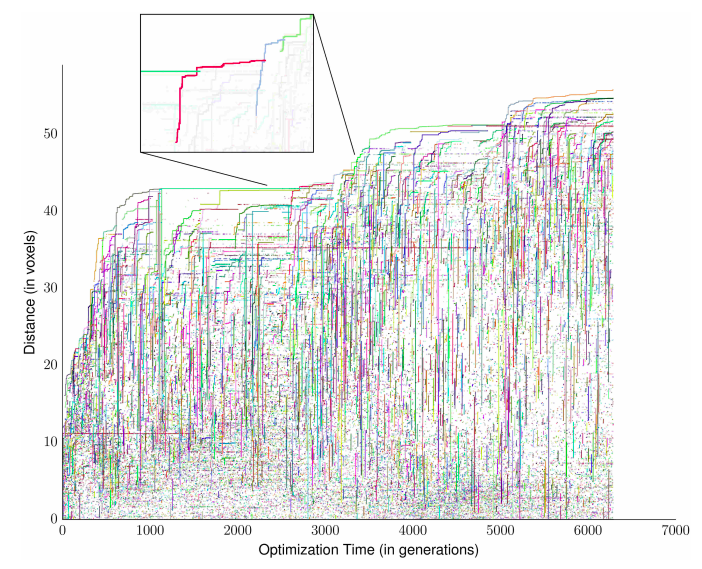 Abstract: Evolution sculpts both the body plans and nervous systems of agents together over time. In contrast, in AI and robotics, a robot’s body plan is usually designed by hand, and control policies are then optimized for that fixed design. The task of simultaneously co-optimizing the morphology and controller of an embodied robot has remained a challenge. In psychology, the theory of embodied cognition posits that behavior arises from a close coupling between body plan and sensorimotor control, which suggests why co-optimizing these two subsystems is so difficult: most evolutionary changes to morphology tend to adversely impact sensorimotor control, leading to an overall decrease in behavioral performance. Here, we further examine this hypothesis and demonstrate a technique for “morphological innovation protection”, which temporarily reduces selection pressure on recently morphologically-changed individuals, thus enabling evolution some time to “readapt” to the new morphology with subsequent control policy mutations. We show the potential for this method to avoid local optima and converge to similar highly fit morphologies across widely varying initial conditions, while sustaining fitness improvements further into optimization. While this technique is admittedly only the first of many steps that must be taken to achieve scalable optimization of embodied machines, we hope that theoretical insight into the cause of evolutionary stagnation in current methods will help to enable the automation of robot design and behavioral training – while simultaneously providing a testbed to investigate the theory of embodied cognition.