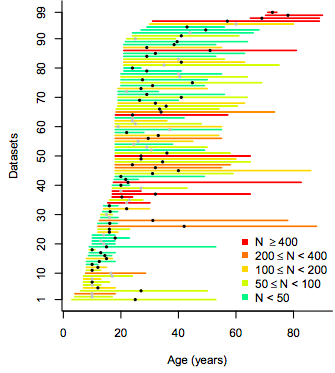 Abstract:
Hemispheric asymmetry is a cardinal feature of human brain organization. Altered brain asymmetry has also been linked to some cognitive and neuropsychiatric disorders. Here, the ENIGMA (Enhancing NeuroImaging Genetics through Meta-Analysis) Consortium presents the largest-ever analysis of cerebral cortical asymmetry and its variability across individuals. Cortical thickness and surface area were assessed in MRI scans of 17,141 healthy individuals from 99 datasets worldwide. Results revealed widespread asymmetries at both hemispheric and regional levels, with a generally thicker cortex but smaller surface area in the left hemisphere relative to the right. Regionally, asymmetries of cortical thickness and/or surface area were found in the inferior frontal gyrus, transverse temporal gyrus, parahippocampal gyrus, and entorhinal cortex. These regions are involved in lateralized functions, including language and visuospatial processing. In addition to population-level asymmetries, variability in brain asymmetry was related to sex, age, and intracranial volume. Interestingly, we did not find significant associations between asymmetries and handedness. Finally, with two independent pedigree datasets (n = 1,443 and 1,113, respectively), we found several asymmetries showing significant, replicable heritability. The structural asymmetries identified and their variabilities and heritability provide a reference resource for future studies on the genetic basis of brain asymmetry and altered laterality in cognitive, neurological, and psychiatric disorders. 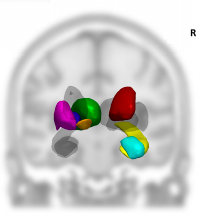 Abstract:
The two hemispheres of the human brain differ functionally and structurally. Despite over a century of research, the extent to which brain asymmetry is influenced by sex, handedness, age, and genetic factors is still controversial. Here we present the largest ever analysis of subcortical brain asymmetries, in a harmonized multi-site study using meta-analysis methods. Volumetric asymmetry of seven subcortical structures was assessed in 15,847 MRI scans from 52 datasets worldwide. There were sex differences in the asymmetry of the globus pallidus and putamen. Heritability estimates, derived from 1170 subjects belonging to 71 extended pedigrees, revealed that additive genetic factors influenced the asymmetry of these two structures and that of the hippocampus and thalamus. Handedness had no detectable effect on subcortical asymmetries, even in this unprecedented sample size, but the asymmetry of the putamen varied with age. Genetic drivers of asymmetry in the hippocampus, thalamus and basal ganglia may affect variability in human cognition, including susceptibility to psychiatric disorders.