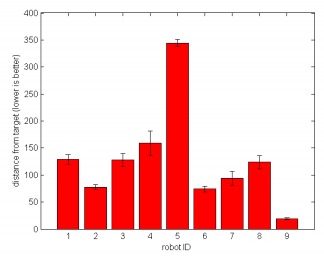 Abstract:
A robot's morphology affects not only its capabilities, but also its evolvability. Here we introduce an evolutionary robotics platform that will enable us to investigate the ability of non-roboticists to collectively explore the design space of evolvable robot body plans. Users create robots in a simulator using an interactive interface, then let evolution find a controller that enables efficient locomotion. The user can change the morphology of the robot and test the new design iteratively, altering the design based on the assessment of the robot's performance after a period of evolution of the controller. We investigate whether there is a correlation between the methods users choose to build robots and the evolvability of the robots.