Scientific Research Centre of Slovenian Academy of Sciences and Arts 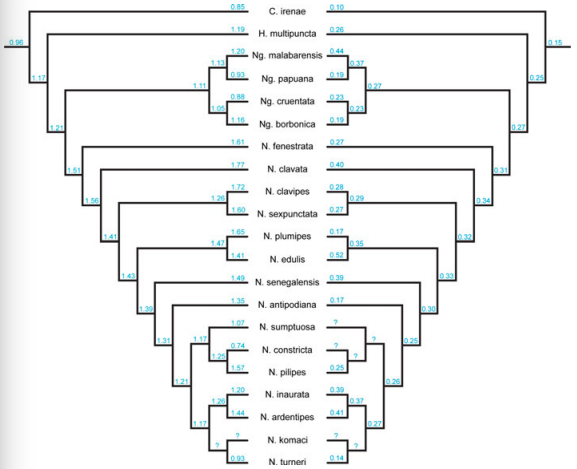 Testing ecological and developmental hypotheses of mean and variation in adult size in nephilid orb-weaving spiders.

Abstract:
Fecundity selection has been hypothesized to drive the evolution of female gigantism in the orb-weaving family Nephilidae. Several species of these spiders also exhibit large amounts of variation in size at maturity in one or both sexes. In this article, we attempt to detect correlations of mean and variation in adult size at a phylogenetic scale between the sexes and with latitude. We tested six predictions derived from three broad developmental, ecological, and age structure hypotheses, using independent contrasts and a recent species-level nephilid phylogeny as well as least squares and other conventional statistics: 1. In both sexes, species with larger mean size will have greater variation in size; 2. Males and females will show correlated changes in mean size and of variation in size; 3. In both sexes, mean size will be negatively correlated with the midpoint of the latitudinal range; 4. In both sexes, tropical species will be more variable; 5. In both sexes, more widespread species will be more variable; 6. Variation in male size will be positively correlated with mean female size. In no cases were male and female development correlated, suggesting that in this lineage male and female body size evolve independently. The only significant trend detected was a positive phylogenetic correlation between variation in female size and latitude, the opposite of prediction 4. Power tests showed that in all tests of the ecological hypothesis, sample sizes were more than adequate to detect significant trends, if present. Our results suggest that evolutionary trends in juvenile development among species are too weak to be detectable in such data sets.