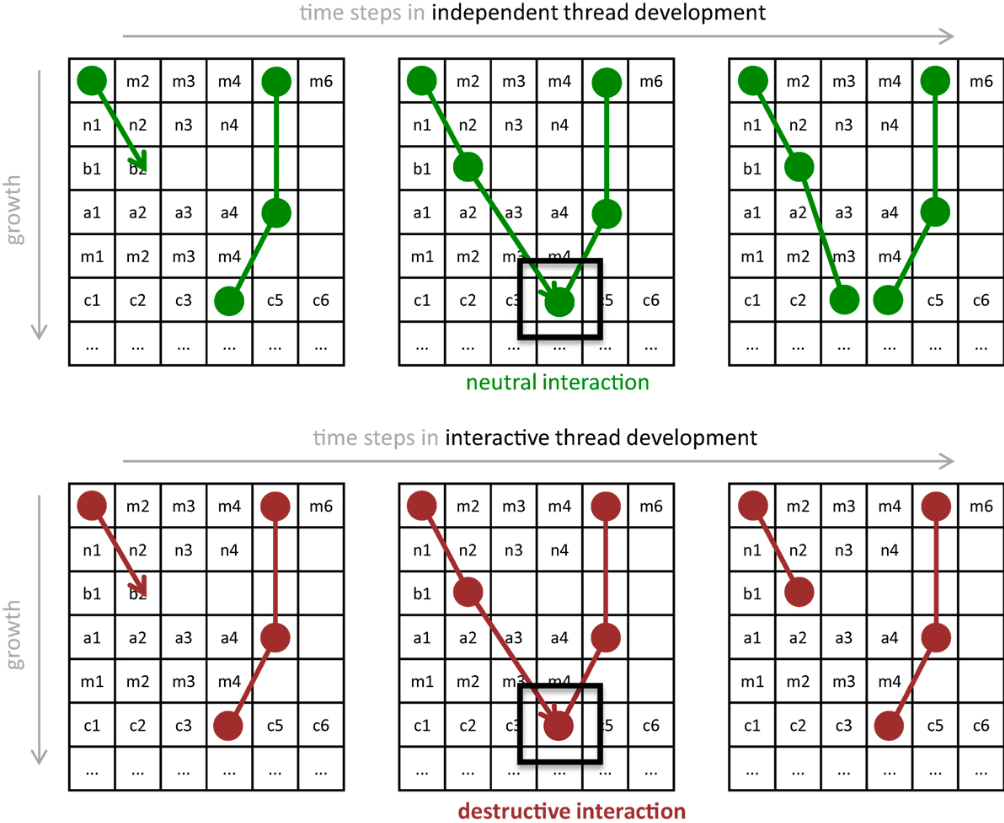 Epigenetic Operators and the evolution of Physically embodied robots.

Abstract:
The genetic operators (GOs) of recombination, mutation, and selection are commonly included in studies of evolution and evolvability, but they are not the only operators that can affect the genotype-to-phenotype (G → P) map and thus the outcomes of evolution. In this paper, we present experiments with an epigenetic operator (EO), interactive wiring of a circuit, alongside common GOs, investigating both epigenetic and GO effects on the evolution of both simulated and physically embodied Braitenberg-inspired robots. As a platform for our experiments, we built a system that encoded the genetics for the physical circuitry of the analog robots and made explicit rules for how that circuitry would be constructed; phenotypic expression consisted of the placement of wires to form the circuitry and thus govern robot behavior. We then varied the presence of gene interactions across populations of robots, studying how the EO—and its effects on G → P maps—affected the results of evolution over several generations. Additionally, a variant of these experiments was run in simulation to provide an independent test of the evolutionary impact of this EO. Our results demonstrate that robot populations with the EO had quantitatively different and potentially less adaptive evolution than populations without it. For example, selection increased the rate at which functional circuitry was lost in the population with the EO, compared to the population without it. In addition, in simulation, EO populations were significantly less fit than populations without it. More generally, results such as these demonstrate the interaction of genetic and EOs during evolution, suggesting the broad importance of including EOs in investigations of evolvability. To our knowledge, our work represents the first physically embodied EO to be used in the evolution of physically embodied robots. 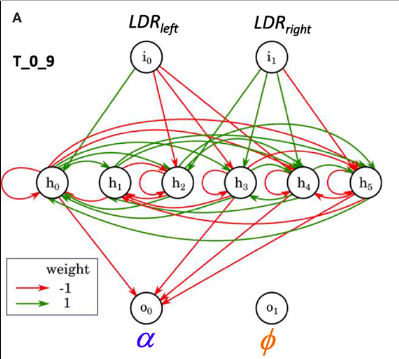 Abstract:
While modularity is thought to be central for the evolution of complexity and evolvability, it remains unclear how systems bootstrap themselves into modularity from random or fully integrated starting conditions. Clune et al. (2013) suggested that a positive correlation between sparsity and modularity is the prime cause of this transition. We sought to test the generality of this modularity–sparsity hypothesis by testing it for the first time in physically embodied robots. A population of 10 Tadros – autonomous, surface-swimming robots propelled by a flapping tail – was used. Individuals varied only in the structure of their neural net controller, a 2 × 6 × 2 network with recurrence in the hidden layer. Each of the 60 possible connections was coded in the genome and could achieve one of three states: −1, 0, and 1. Inputs were two light-dependent resistors and outputs were two motor control variables to the flapping tail, one for the frequency of the flapping and the other for the turning offset. Each Tadro was tested separately in a circular tank lit by a single overhead light source. Fitness was the amount of light gathered by a vertically oriented sensor that was disconnected from the controller net. Reproduction was asexual, with the top performer cloned and then all individuals entered into a roulette wheel selection process, with genomes mutated to create the offspring. The starting population of networks was randomly generated. Over 10 generations, the population’s mean fitness increased twofold. This evolution occurred in spite of an unintentional integer overflow problem in recurrent nodes in the hidden layer that caused outputs to oscillate. Our investigation of the oscillatory behavior showed that the mutual information of inputs and outputs was sufficient for the reactive behaviors observed. While we had predicted that both modularity and sparsity would follow the same trend as fitness, neither did so. Instead, selection gradients within each generation showed that selection directly targeted sparsity of the connections to the motor outputs. Modularity, while not directly targeted, was correlated with sparsity, and hence was an indirect target of selection, its evolution a “by-product” of its correlation with sparsity. 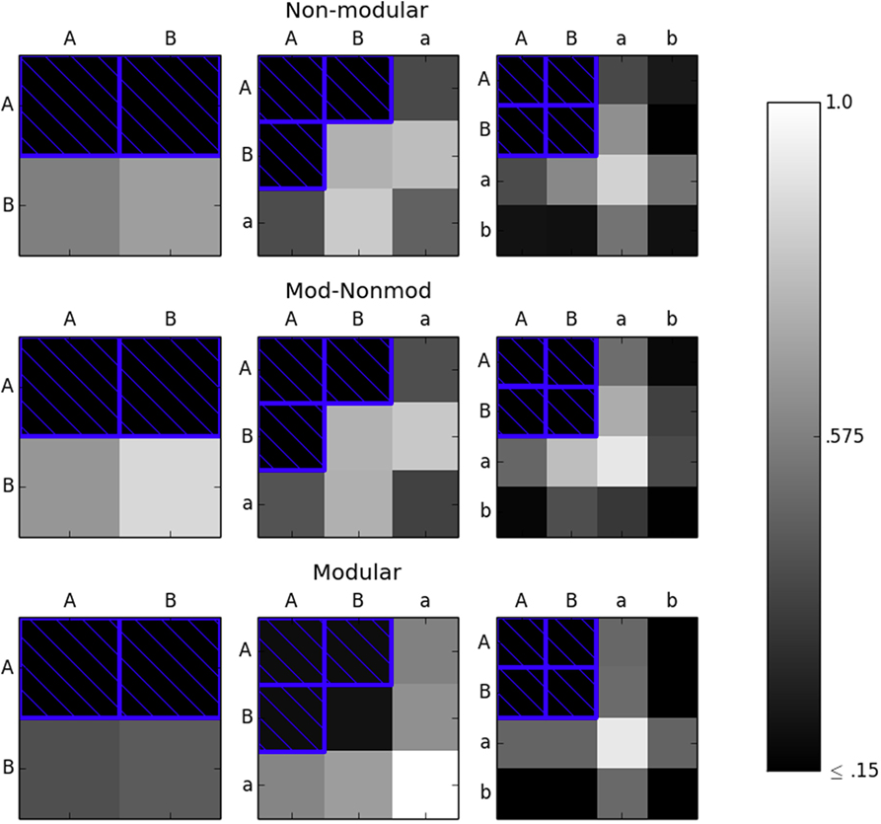 Morphological Modularity Can Enable the Evolution of Robot Behavior to Scale Linearly with the Number of Environmental Features.

Abstract:
In evolutionary robotics, populations of robots are typically trained in simulation before one or more of them are instantiated as physical robots. However, in order to evolve robust behavior, each robot must be evaluated in multiple environments. If an environment is characterized by f free parameters, each of which can take one of np features, each robot must be evaluated in all nfp environments to ensure robustness. Here, we show that if the robots are constrained to have modular morphologies and controllers, they only need to be evaluated in np environments to reach the same level of robustness. This becomes possible because the robots evolve such that each module of the morphology allows the controller to independently recognize a familiar percept in the environment, and each percept corresponds to one of the environmental free parameters. When exposed to a new environment, the robot perceives it as a novel combination of familiar percepts which it can solve without requiring further training. A non-modular morphology and controller however perceives the same environment as a completely novel environment, requiring further training. This acceleration in evolvability – the rate of the evolution of adaptive and robust behavior – suggests that evolutionary robotics may become a scalable approach for automatically creating complex autonomous machines, if the evolution of neural and morphological modularity is taken into account.

Abstract:
Random recombination in evolutionary algorithms can be counterproductive in systems that evolve increasing modularity, because such operators do not preserve community structures during their development. Partly because of this, methods have been proposed that derandomize recombination by placing potential crossover locations under evolutionary control. Since crossover is likely to be particularly useful when genetic material that generates incipient phenotype modules is recombined, there may be an advantage to seeking such modularity directly in the phenotype and probabilistically focusing recombination at such "hotspot" locations. Here we show that such phenotypically-aware crossover operators can outcompete random or evolved crossover points as the size of the system being evolved grows. As this crossover operator can be viewed as epigenetic, and as epigenetic processes seem to be common in biological systems, other such epigenetic mechanisms may further improve future evolutionary algorithms. 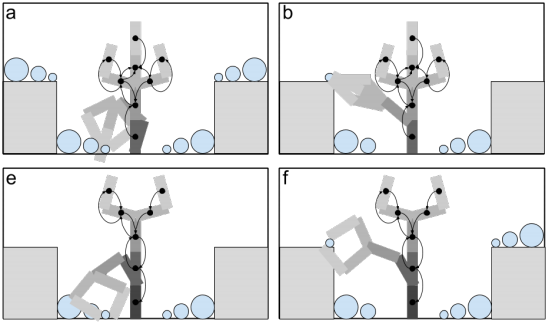 Abstract:
Although recent work has demonstrated that modularity can increase evolvability in non-embodied systems, it remains to be seen how the morphologies of embodied agents influences the ability of an evolutionary algorithm to find useful and modular controllers for them. We hypothesize that a modular control system may enable different parts of a robot's body to sense and react to stimuli independently, enabling it to correctly recognize a seemingly novel environment as, in fact, a composition of familiar percepts and thus respond appropriately without need of further evolution. Here we provide evidence that supports this hypothesis: We found that such robots can indeed be evolved if (1) the robot's morphology is evolved along with its controller, (2) the fitness function selects for the desired behavior and (3) also selects for conservative and robust behavior. In addition, we show that if constraints (1) and (3) are relaxed, or structural modularity is selected for directly, the robots have too little or too much modularity and lower evolvability. Thus, we demonstrate a previously unknown relationship between modularity and embodied cognition: evolving morphology and control such that robots exhibit conservative behavior indirectly selects for appropriate modularity and, thus, increased evolvability.