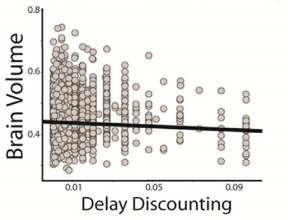 40. Neural Correlates of Adolescent Irritability and Its Comorbidity.

Abstract:
Background: We examined irritability (IRR) in IMAGEN, a sample of 2024 14-year-youth from five European countries. Irritable mood is a very common and often impairing symptom of psychopathology and is defined by temper outbursts and proneness to anger. It has been associated with a host of psychiatric and nonpsychiatric conditions including suicide, violence, and cardiovascular disease. Relatively little is known about the neural mechanisms of irritability in childhood and adolescence. Methods: The Development and Well-Being Assessment (DAWBA) was used to assess ADHD, MDD, ODD, and GAD. Three items from the DAWBA, selected as close matches to the Affective Reactivity Index, were used to assess irritability. Structural MRI (sMRI) was examined using whole brain Voxel Based Morphometry analysis and functional MRI (fMRI) was examined during a stop signal task of inhibitory control. sMRI and fMRI data for these regions were included in structural equation models to examine the direct and indirect associations between IRR and comorbid DSM diagnoses. Results: A voxelwise regression analysis between GMV and irritability showed, after correcting for multiple comparisons (p,0.05), a significant negative correlation in two bilateral clusters and included the bilateral frontal gyrus and the left insula. The seven regions showing GMV reductions revealed significantly decreased activity in irritable subjects vs controls, in the bilateral superior temporal gyrus (STG), the right insula, and the right ventral pre- and postcentral gyrus (VPPG) (p,0.05), after controlling for other diagnoses. Conclusions: Decreased GMV and less response inhibition activity was observed within the right VPPG and the bilateral STG for individuals with high IRR.

Genetic imaging consortium for addiction medicine: From neuroimaging to genes.

Abstract:
Since the sample size of a typical neuroimaging study lacks sufficient statistical power to explore unknown genomic associations with brain phenotypes, several international genetic imaging consortia have been organized in recent years to pool data across sites. The challenges and achievements of these consortia are considered here with the goal of leveraging these resources to study addiction. The authors of this review have joined together to form an Addiction working group within the framework of the ENIGMA project, a meta-analytic approach to multisite genetic imaging data. Collectively, the Addiction working group possesses neuroimaging and genomic data obtained from over 10,000 subjects. The deadline for contributing data to the first round of analyses occurred at the beginning of May 2015. The studies performed on this data should significantly impact our understanding of the genetic and neurobiological basis of addiction.

Cannabis use in early adolescence: Evidence of amygdala hypersensitivity to signals of threat.

Abstract:
Cannabis use in adolescence may be characterized by differences in the neural basis of affective processing. In this study, we used an fMRI affective face processing task to compare a large group (n = 70) of 14-year olds with a history of cannabis use to a group (n = 70) of never-using controls matched on numerous characteristics including IQ, SES, alcohol and cigarette use. The task contained short movies displaying angry and neutral faces. Results indicated that cannabis users had greater reactivity in the bilateral amygdalae to angry faces than neutral faces, an effect that was not observed in their abstinent peers. In contrast, activity levels in the cannabis users in cortical areas including the right temporal-parietal junction and bilateral dorsolateral prefrontal cortex did not discriminate between the two face conditions, but did differ in controls. Results did not change after excluding subjects with any psychiatric symptomology. Given the high density of cannabinoid receptors in the amygdala, our findings suggest cannabis use in early adolescence is associated with hypersensitivity to signals of threat. Hypersensitivity to negative affect in adolescence may place the subject at-risk for mood disorders in adulthood.