Abstract:
Objective: This study investigated the neural correlates of psychotic-like experiences in youths during tasks involving inhibitory control, reward anticipation, and emotion processing. A secondary aim was to test whether these neurofunctional correlates of risk were predictive of psychotic symptoms 2 years later. Method: Functional imaging responses to three paradigms—the stop-signal, monetary incentive delay, and faces tasks—were collected in youths at age 14, as part of the IMAGEN study. At baseline, youths from London and Dublin sites were assessed on psychotic-like experiences, and those reporting significant experiences were compared with matched control subjects. Significant brain activity differences between the groups were used to predict, with cross-validation, the presence of psychotic symptoms in the context of mood fluctuation at age 16, assessed in the full sample. These prediction analyses were conducted with the London-Dublin subsample (N=246) and the full sample (N=1,196). Results: Relative to control subjects, youths reporting psychotic-like experiences showed increased hippocampus/amygdala activity during processing of neutral faces and reduced dorsolateral prefrontal activity during failed inhibition. The most prominent regional difference for classifying 16-year-olds with mood fluctuation and psychotic symptoms relative to the control groups (those with mood fluctuations but no psychotic symptoms and those with no mood symptoms) was hyperactivation of the hippocampus/amygdala, when controlling for baseline psychotic-like experiences and cannabis use. Conclusions: The results stress the importance of the limbic network’s increased response to neutral facial stimuli as a marker of the extended psychosis phenotype. These findings might help to guide early intervention strategies for at-risk youths. 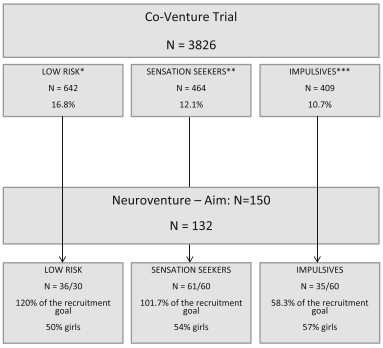 Abstract:
Background: Onset of alcohol use by 14 relative to 21 years of age strongly predicts elevated risk for severe alcohol use problems, with 27% versus 4% of individuals exhibiting alcohol dependence within 10 years of onset. What remains unclear is whether this early alcohol use (i) is a marker for later problems, reflected as a pre-existing developmental predisposition, (ii) causes global neural atrophy or (iii) specifically disturbs neuro-maturational processes implicated in addiction, such as executive functions or reward processing. Since our group has demonstrated that a novel intervention program targeting personality traits associated with adolescent alcohol use can prevent the uptake of drinking and binge drinking by 40 to 60%, a crucial question is whether prevention of early onset alcohol misuse will protect adolescent neurodevelopment and which domains of neurodevelopment can be protected. Methods: A subsample of 120 youth at high risk for substance misuse and 30 low-risk youth will be recruited from the Co-Venture trial (Montreal, Canada) to take part in this 5-year follow-up neuroimaging study. The Co-Venture trial is a community-based cluster-randomised trial evaluating the effectiveness of school-based personality-targeted interventions on substance use and cognitive outcomes involving approximately 3800 Grade 7 youths. Half of the 120 high-risk participants will have received the preventative intervention program. Cognitive tasks and structural and functional neuroimaging scans will be conducted at baseline, and at 24- and 48-month follow-up. Two functional paradigms will be used: the Stop-Signal Task to measure motor inhibitory control and a modified version of the Monetary Incentive Delay Task to evaluate reward processing. Discussion: The expected results should help identify biological vulnerability factors, and quantify the consequences of early alcohol abuse as well as the benefits of early intervention using brain metrics.