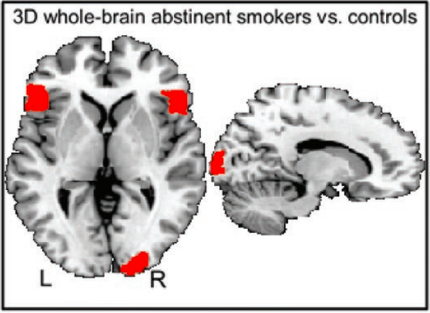 Abstract:
Introduction: Research on cigarette smokers suggests cognitive and behavioral impairments. However, much remains unclear how the functional neurobiology of smokers is influenced by nicotine state. Therefore, we sought to determine which state, be it acute nicotine abstinence or satiety, would yield the most robust differences compared with nonsmokers when assessing neurobiological markers of nicotine dependence. Methods: Smokers (N  =  15) and sociodemographically matched nonsmokers (N  =  15) were scanned twice using a repeated-measures design. Smokers were scanned after a 24-hour nicotine abstinence and immediately after smoking their usual brand cigarette. The neuroimaging battery included a stop-signal task of response inhibition and pseudocontinuous arterial spin labeling to measure cerebral blood flow (CBF). Whole-brain voxel-wise analyses of covariance were carried out on stop success and stop fail Stop-Signal Task contrasts and CBF maps to assess differences among nonsmokers, abstinent smokers, and satiated smokers. Cluster correction was performed using AFNI’s 3dClustSim to achieve a significance of p < .05. Results: Smokers exhibited higher brain activation in bilateral inferior frontal gyrus, a brain region known to be involved in inhibitory control, during successful response inhibitions relative to nonsmokers. This effect was significantly higher during nicotine abstinence relative to satiety. Smokers also exhibited lower CBF in the bilateral inferior frontal gyrus than nonsmokers. These hypoperfusions were not different between abstinence and satiety. Conclusions: These findings converge on alterations in smokers in prefrontal circuits known to be critical for inhibitory control. These effects are present, even when smokers are satiated, but the neural activity required to achieve performance equal to controls is increased when smokers are in acute abstinence. Implications: Our multimodal neuroimaging study gives neurobiological insights into the cognitive demands of maintaining abstinence and suggests targets for assessing the efficacy of therapeutic interventions. 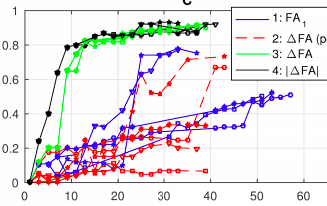 Abstract:
The goal of this study was to investigate patterns of axonal injury in the first week after mild traumatic brain injury (mTBI). We performed a prospective cohort study of 20 patients presenting to the emergency department with mTBI, using 3.0T diffusion tensor MRI immediately after injury and again at 1 week post-injury. Corresponding data were acquired from 16 controls over a similar time interval. Fractional anisotropy (FA) and other diffusion measures were calculated from 11 a priori selected axon tracts at each time-point, and the change across time in each region was quantified for each subject. Clinical outcomes were determined by standardized neurocognitive assessment. We found that mTBI subjects were significantly more likely to have changes in FA in those 11 regions of interest across the one week time period, compared to control subjects whose FA measurements were stable across time. Longitudinal imaging was more sensitive to these subtle changes in white matter integrity than cross-sectional assessments at either of two time points, alone. Analyzing the sources of variance in our control population, we show that this increased sensitivity is likely due to the smaller within-subject variability obtained by longitudinal analysis with each subject as their own control. This is in contrast to the larger between-subject variability obtained by cross-sectional analysis of each individual subject to normalized data from a control group. We also demonstrated that inclusion of all a priori ROIs in an analytic model as opposed to measuring individual ROIs improves detection of white matter changes by overcoming issues of injury heterogeneity. Finally, we employed genetic programming (a bio-inspired computational method for model estimation) to demonstrate that longitudinal changes in FA have utility in predicting the symptomatology of patients with mTBI. We conclude concussive brain injury caused acute, measurable changes in the FA of white matter tracts consistent with evolving axonal injury and/or edema, which may contribute to post-concussive symptoms.