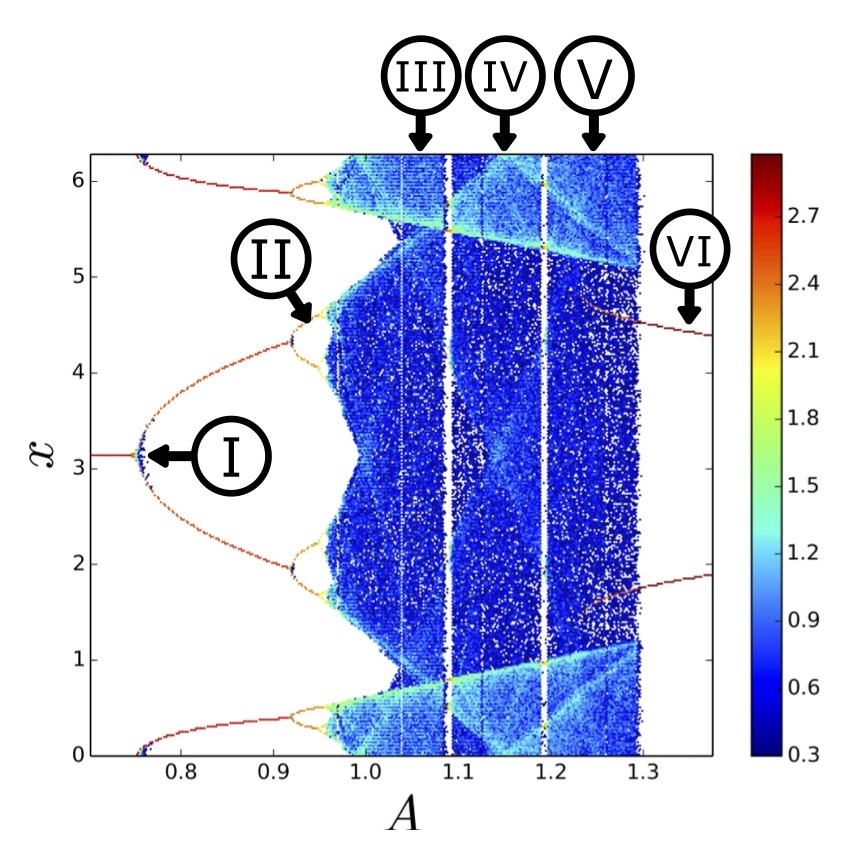 Abstract:
The spatio-temporally periodic (STP) potential is interesting in Physics due to the intimate coupling between its time and spatial components. In this paper, we begin with a brief discussion of the dynamical behaviors of a single particle in a STP potential and then examine the dynamics of multiple particles interacting in a STP potential via the electric Coulomb potential. For the multiple particles' case, we focus on the occurrence of bifurcations when the amplitude of the STP potential varies. It is found that the particle concentration of the system plays an important role; the type of bifurcations that occur and the number of attractors present in the Poincaré sections depend on whether the number of particles in the simulation is even or odd. In addition to the nonlinear dynamical approach, we also discuss dependence of the squared fractional deviation of particles' kinetic energy of the multiple particle system on the amplitude of the STP potential which can be used to elucidate certain transitions of states; this approach is simple and useful particularly for experimental studies of complicated interacting systems. 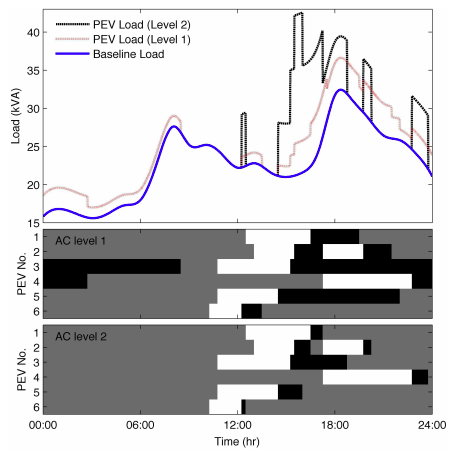 Understanding and Managing the Impacts of Electric Vehicles on Electric Power Distribution Systems.

Abstract:
While there are a number of useful studies on the greenhouse gas impacts of transportation electrification, only recently have researchers begun to understand the impacts of electricity on electric power infrastructure. Thus, the primary goals of this research project were to understand these impacts in detail and to develop new methods for reducing the impact of transportation electrification on the electricity transmission and distribution infrastructure. In particular, this report focuses on understanding and mitigating the impact of transportation electrification on the medium and low voltage distribution infrastructure, through which electricity is transported from the bulk power grid, through neighborhoods, to individual homes and businesses. This project focused specifically on the impacts of electric vehicles on two key components of power distribution systems: residential service transformers, and underground cables. This project also studied new methods to dynamically adjust the number of electric vehicles that are charging simultaneously, in order to mitigate the risk of electricity infrastructure damage from electric vehicle charging. 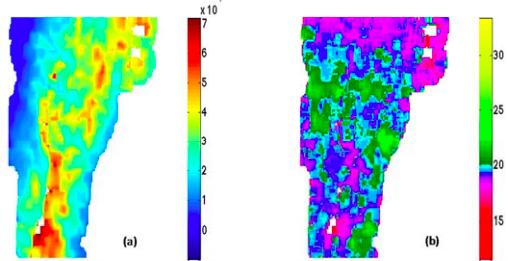 Multi-Scale Model of the US Transportation Energy Market for Policy Assessment.

Abstract:
While studies based on past data trends for hybrid electric vehicles (HEVs) and other fuel-efficient vehicles provide relevant insight, they are of limited applicability for estimating consumer response to the very different conditions associated with current-day adoption of plug-in hybrid electric vehicle (PHEV) technology. The plug-in technology offers new challenges to market penetration, and environmental attitudes and awareness are also very different than in past decades. While awareness of the role of vehicle emissions in global climate change is high in many parts of the world, it is not clear how consumers will weigh a vehicle’s heuristically perceived benefits against rational financial considerations when making a vehicle purchasing decision. The research goals of this project were: to create a model to study potential PHEV market penetration in the personal transportation sector; to assemble data to properly inform the model; to develop methods for efficient up-scaling of model behavior; to use the model to assess the sensitivities of system behavior to various policies and market conditions; and to understand the regulatory regime necessary to support widespread adoption of PHEVs. Various complex systems modeling approaches were used to tackle these goals. To fill identified gaps in the data, the authors designed, conducted, and analyzed an extensive survey on consumer attitudes towards PHEVs using the Amazon Mechanical Turk crowd-sourcing platform. 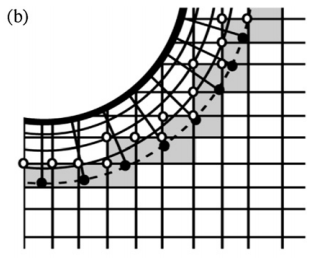 Modeling the Impact of Electric Vehicle Charging on Heat Transfer around Underground Cables.

Abstract:
While increased use of plug-in electric vehicles (PEVs) has environmental and economic benefits, the increased load is expected to strain components of the power delivery infrastructure. Within electric distribution systems, overloading of transformers and underground cables and associated thermal degradation is of particular concern. The current paper estimates the effect of different levels and types of PEV charging on transient heating of underground cables. Transportation survey data is used to estimate travel miles and arrival/departure times for a typical residential neighborhood, which is subsequently used to estimate the electric load curve with different levels of PEV penetration. The estimated load curves are used to perform transient heat transfer computations for a system of three buried cables using an overset grid finite-difference approach, the results of which are used to estimate acceleration of cable thermal degradation. Vehicle charging, even for a modest 30% PEV penetration, is found to nearly double peak temperature rise above ambient at the cable surface, increase the daily variance in cable temperatures, and significantly decrease the estimated time to failure for cables with thermally sensitive insulation. 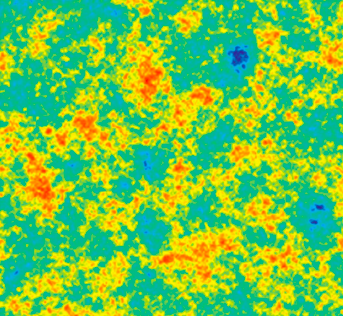 Abstract:
A spatially explicit agent-based vehicle consumer choice model is developed to explore sensitivities and nonlinear interactions between various potential influences on plug-in hybrid vehicle (PHEV) market penetration. The model accounts for spatial and social effects (including threshold effects, homophily, and conformity) and media influences. Preliminary simulations demonstrate how such a model could be used to identify nonlinear interactions among potential leverage points, inform policies affecting PHEV market penetration, and help identify future data collection necessary to more accurately model the system. We examine sensitivity of the model to gasoline prices, to accuracy in estimation of fuel costs, to agent willingness to adopt the PHEV technology, to PHEV purchase price and rebates, to PHEV battery range, and to heuristic values related to gasoline usage. Our simulations indicate that PHEV market penetration could be enhanced significantly by providing consumers with ready estimates of expected lifetime fuel costs associated with different vehicles (e.g., on vehicle stickers), and that increases in gasoline prices could nonlinearly magnify the impact on fleet efficiency. We also infer that a potential synergy from a gasoline tax with proceeds is used to fund research into longer-range, lower-cost PHEV batteries. 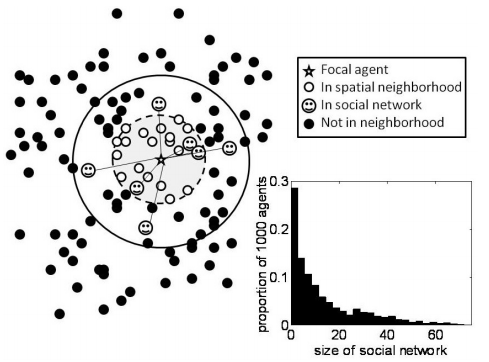 An Agent-Based Model for Estimating Consumer Adoption of PHEV Technology.

Abstract:
This study presents a prototype of a spatially-explicit and socially-embedded agent based model to study adoption of plug-in hybrid vehicle (PHEV) technology under a variety of scenarios. Heterogeneous agents decide whether or not to buy a PHEV by weighing environmental benefits and financial considerations (based on their personal driving habits, their projections of future gas prices, and how accurately they estimate fuel costs), subject to various social influences. Proof-of-concept results are presented to illustrate the types of questions which could be addressed by such a model, and how they may help to inform policy-makers and/or vehicle manufacturers. For example, our results indicate that simple web-based tools for helping consumers to more accurately estimate relative fuel costs could dramatically increase PHEV adoption. 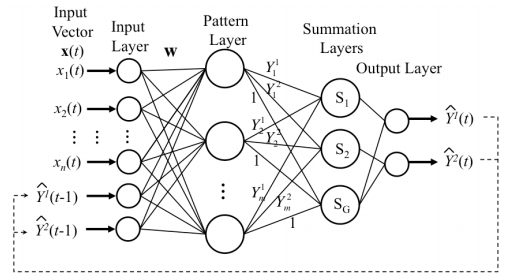 Abstract:
Agent based models (ABMs) can be used for simulating consumer transportation discrete choices, while incorporating the effects of heterogeneous agent behaviors and social influences. However, the application of ABMs at large‐scales may be computationally prohibitive (e.g., for millions of agents). In an attempt to harness the modeling capabilities of ABMs at large scales, we develop a recurrent artificial neural network (ANN) to replicate nonlinear spatio‐temporal discrete choice patterns produced by a spatially‐explicit ABM with social influence. This particular ABM has been developed to model consumer decision making between purchasing a Prius‐like hybrid or plug‐in hybrid electric vehicle (PHEV) for a given geographic region (e.g., city or town). Our goal is to see if an ANN trained at the city scale can operate as a “fast function approximator” to estimate nonlinear dynamic response functions (e.g., fleet distribution, environmental attitudes, etc.) based on city‐wide attributes (e.g., socio‐economic distributions). Recurrent feedback connections were added to the ANN to leverage the temporal history and correlations and improve forecasts in time. Outputs from the city‐scale ABM, run for a variety of population sizes and initial and input conditions, were used to train and test the ANN. Initial results suggest the ABM may be replaced by ANNs that interact with each other and other agents (e.g., manufacturing agents) to investigate PHEV penetration at the national scale.