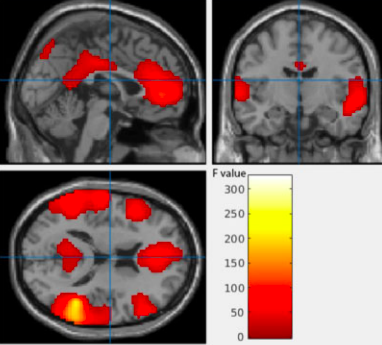 Abstract:
Negative life events (NLE) contribute to anxiety and depression disorders, but their relationship with brain functioning in adolescence has rarely been studied. We hypothesized that neural response to social threat would relate to NLE in the frontal–limbic emotional regions. Participants (N = 685) were drawn from the Imagen database of 14-year-old community adolescents recruited in schools. They underwent functional MRI while viewing angry and neutral faces, as a probe to neural response to social threat. Lifetime NLEs were assessed using the ‘distress’, ‘family’ and ‘accident’ subscales from a life event dimensional questionnaire. Relationships between NLE subscale scores and neural response were investigated. Links of NLE subscales scores with anxiety or depression outcomes at the age of 16 years were also investigated. Lifetime ‘distress’ positively correlated with ventral-lateral orbitofrontal and temporal cortex activations during angry face processing. ‘Distress’ scores correlated with the probabilities of meeting criteria for Generalized Anxiety Disorder or Major Depressive Disorder at the age of 16 years. Lifetime ‘family’ and ‘accident’ scores did not relate with neural response or follow-up conditions, however. Thus, different types of NLEs differentially predicted neural responses to threat during adolescence, and differentially predicted a de novo internalizing condition 2 years later. The deleterious effect of self-referential NLEs is suggested. 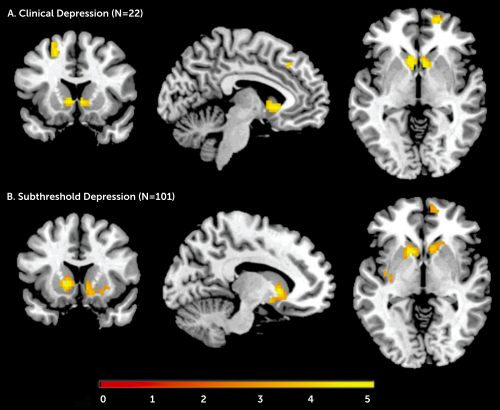 The brain’s response to reward anticipation and depression in adolescence: Dimensionality, specificity, and longitudinal predictions in a community-based sample.

Abstract:
Objective: The authors examined whether alterations in the brain’s reward network operate as a mechanism across the spectrum of risk for depression. They then tested whether these alterations are specific to anhedonia as compared with low mood and whether they are predictive of depressive outcomes. Method: Functional MRI was used to collect blood-oxygen-level-dependent (BOLD) responses to anticipation of reward in the monetary incentive task in 1,576 adolescents in a community-based sample. Adolescents with current subthreshold depression and clinical depression were compared with matched healthy subjects. In addition, BOLD responses were compared across adolescents with anhedonia, low mood, or both symptoms, cross-sectionally and longitudinally. Results: Activity in the ventral striatum was reduced in participants with subthreshold and clinical depression relative to healthy comparison subjects. Low ventral striatum activation predicted transition to subthreshold or clinical depression in previously healthy adolescents at 2-year follow-up. Brain responses during reward anticipation decreased in a graded manner between healthy adolescents, adolescents with current or future subthreshold depression, and adolescents with current or future clinical depression. Low ventral striatum activity was associated with anhedonia but not low mood; however, the combined presence of both symptoms showed the strongest reductions in the ventral striatum in all analyses. Conclusions: The findings suggest that reduced striatal activation operates as a mechanism across the risk spectrum for depression. It is associated with anhedonia in healthy adolescents and is a behavioral indicator of positive valence systems, consistent with predictions based on the Research Domain Criteria.