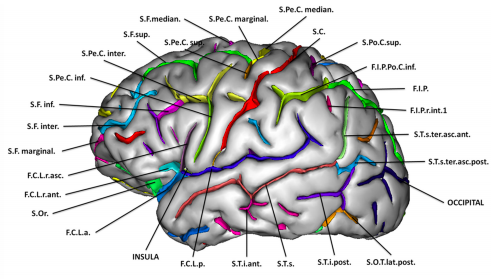 Incomplete hippocampal inversion: A comprehensive MRI study of over 2000 subjects.

Abstract:
The incomplete-hippocampal-inversion (IHI), also known as malrotation, is an atypical anatomical pattern of the hippocampus, which has been reported in healthy subjects in different studies. However, extensive characterization of IHI in a large sample has not yet been performed. Furthermore, it is unclear whether IHI are restricted to the medial-temporal lobe or are associated with more extensive anatomical changes. Here, we studied the characteristics of IHI in a community-based sample of 2008 subjects of the IMAGEN database and their association with extra-hippocampal anatomical variations. The presence of IHI was assessed on T1-weighted anatomical magnetic resonance imaging (MRI) using visual criteria. We assessed the association of IHI with other anatomical changes throughout the brain using automatic morphometry of cortical sulci. We found that IHI were much more frequent in the left hippocampus (left: 17%, right: 6%, χ2−test, p < 10−28). Compared to subjects without IHI, subjects with IHI displayed morphological changes in several sulci located mainly in the limbic lobe. Our results demonstrate that IHI are a common left-sided phenomenon in normal subjects and that they are associated with morphological changes outside the medial temporal lobe.